Share
Facebook Twitter LinkedIn StumbleUpon Tumblr Pinterest Reddit WhatsApp Telegram Share via Email Print
Share
The co-founder of Australian online retailer Shoes of Prey, which allows customers to design their own footwear, hopes to one day allow customers to print out pairs at home as technology improves and consumer demand grows for personalized products.
Founded in 2009, Shoes of Prey allows women to create unique designs on its website, choosing from 300,000 trillion possible permutations of materials, colors, styles and sizes. It promises to deliver in four weeks but often manages two.
Jodie Fox, who set up Shoes of Prey in 2009 with former Google Inc employees Michael Fox and Mike Knapp, expects consumer demand for faster delivery to keep rising.
“Ideally we would get to a point … where we are able to (deliver) overnight a pair of shoes to you that you designed the day before,” Fox said in a telephone interview from Sydney.
That will only be possible once advances in 3-D printing technology allow the company, which currently ships worldwide from a factory in China, to set up small manufacturing hubs around the globe.
Longer-term, Fox can imagine being able to check the weather, choose an outfit and design a pair of matching shoes that can print out in her wardrobe while she takes a shower.
“To truly marry real customization and immediacy is a way bigger challenge,” she said. “My dream of the future is manufacturing in the home.”
CUSTOM MADE
Sportswear firms such as Nike and Adidas already allow fans to personalize sneakers ordered online and Adidas hopes to be able to produce a custom-made running shoe from scratch in store by next year.
A survey by consultants Deloitte shows 37 percent of consumers are interested in buying personalized footwear, rising to 48 percent for those aged between 16 and 24.
Fox said Shoes of Prey’s sales had risen 120 percent in the last year, helped by the six design studios the brand has opened in the United States in upscale Nordstrom department stores.
Fox, 33, said customers still prefer to buy shoes in store despite the advent of e-commerce. “We want to touch it, we want to see it, we want to understand it in its physical form before we buy it. That hasn’t changed,” she said.
The top five materials her customers choose are all black, Fox said, and the most popular style is a three-inch stiletto, often with a personal twist like a colorful lining.
Fox, who prefers either totally flat shoes or a heel at least four inches high, said her typical customer is a 25- to 35-year-old professional woman with above-average income, not surprising given a price tag of about $220 per pair.
“Honestly, Shoes of Prey is not about shoes. It is about this whole idea of getting you what you want, when you want it, and that will extend into many products,” Fox said.
She said her Italian grandmother had laughed when she described her business, noting cobblers used to make made-to-measure shoes when she grew up in Sicily.
“We’re reimagining something that was a product of days past with the capabilities we have today,” Fox said. “That is why technology is so exciting.” 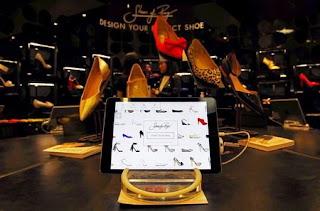 Spanish tenor Carreras to sing in LONDON:Show entitled "A Life in Music"