Share
Facebook Twitter LinkedIn StumbleUpon Tumblr Pinterest Reddit WhatsApp Telegram Share via Email Print
Share
Norway’s Edvard Munch and Dutch master Vincent Van Gogh lived at the same time and both struggled to put their inner demons on canvas, but they never met in real life.
A broad collection of their paintings, which greatly influenced modern 19th-century artwork, will hang side by side for the first time at an exhibit opening at the Van Gogh Museum in the Netherlands opening on Friday.
By juxtaposing works like “The Scream”, Munch’s best known painting of a tormented soul, against Van Gogh’s “The Bridge of Trinquetaille”, the creators explore similarities in their visions of life.
Both painters broke from traditional styles, working with forms that embraced deep swirling colors or thick dabs. Though they both spent time in Paris in the mid-1880s, their paths never crossed.
“Through their experiences of suffering and pain as well as their ability to see beauty in the smallest things, they were able to render that personal experience in their art,” said Van Gogh Museum curator Maite van Dijk.
Art historians and the public alike have long compared their works, but the exhibition, which was six years in the making, offered a first chance for a formal comparative study.
Van Gogh, relatively unknown during his life, was still an influence to Munch, who wrote about the Dutch post-impressionist in his journals, which will also be on display.
“I had thought and desired, like he, not to allow my flame to become extinguished and with burning brush to paint until the end,” Munch wrote in a tribute to Van Gogh in 1933.
The exhibition features the first version of the “The Scream”, on loan from the Munch Museum in Oslo, to be seen in the Netherlands for the first time.
Munch created four other versions of the artwork until 1910, three of which are on display in Norway. The fourth was sold in 2012 for just under $120 million in one of the world’s most expensive art auctions to date.
Among others, the exhibition brings together Munch’s “Starry Night”, painted in 1922, and Van Gogh’s 1888 “Starry Night Above the Rhone”, demonstrating Van Gogh’s influence on Munch.
But it also demonstrates their common focus on essential themes and their discovery of religion in nature. Excerpts from letters and journal are also put side by side to show affinities in their troubled personal lives.
Both painters suffered breakdowns, depression and rage, which made it onto the canvas of emotionally charged paintings.
The exhibition, featuring 75 paintings including other rare pieces by Munch such as “The Sick Child” and “Madonna”, was in Oslo from May till September, when the Munch museum broke its all-time record with 170,000 viewers.
The Amsterdam display is expected to draw the most viewers, the Van Gogh Museum, having attracted 1.6 million visitors last year. It runs through Jan. 17. 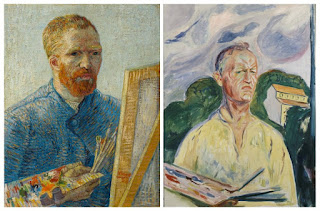 Fish scales to fangs: Surprising tale of how teeth got their bite