Share
Facebook Twitter LinkedIn StumbleUpon Tumblr Pinterest Reddit WhatsApp Telegram Share via Email Print
Share
Singing a live-streamed concert in London, seven-time Grammy award winning American country singer Carrie Underwood said she thinks her style of music knows no boundaries because it’s about “real people” everywhere.
“I definitely get that country music has most of its culture in the (United) States and in the southern part of the States. But we sing about real people and real stories and people that work hard, and I feel like that’s universal,” Underwood told Reuters on Monday night at London’s Roundhouse music venue.
“So country music has evolved a lot over the decades and I feel like there’s a lot of artists like myself that are just working hard to break stereotypes and just bring good music to everybody,” Underwood said before stepping on stage to perform for the live-streamed Apple Music Festival.
Underwood, 32, rose to fame after winning the musical talent contest “American Idol” in 2005. After her debut album “Some Hearts” was voted the top country album of the past decade by trade publication Billboard, she said she’d felt under pressure for the follow-up, but now has her career in hand.
“I felt like there was a lot of pressure on my second album, and like my first headlining tour. There’s certain things that have been in my career that I felt like I was just needing them to work,” she said.
“At this point in my career, 10 years in, I feel like some of that’s off because I feel like I’ve solidified a place in country music, on the radio… I have an amazing fan base that’s incredibly supportive.
“So I don’t feel like I have to top what I did last time and because of that I feel like I’m able to make better music and be more creative and just do things that are good for the sake of being good and not like for the sake of trying to sell albums or trying to get played on the radio.”
Underwood, who is among the top selling U.S. female vocalists, and whose fifth album, “Storyteller”, will be released in October, said social media is increasingly important in her career.
“It is playing a bigger and bigger role in the careers of music artists especially. But you know it is what it is and it’s wonderful to be able to connect with people that you might not ever get to see.
“You know there’s people in other countries that are like ‘Carrie please come to Brazil’ and I’m like, ‘Oh my gosh, people in Brazil have heard of me, that’s incredible.’ So that part’s really cool.” 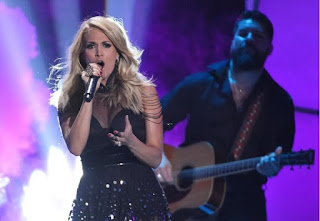 Robert De Niro not out of fashion 'The Intern'