Share
Facebook Twitter LinkedIn StumbleUpon Tumblr Pinterest Reddit WhatsApp Telegram Share via Email Print
Share
There are lots of reasons people live in California’s Modjeska Canyon.
Nestled against the mountains and abutting the Cleveland National Forest, the area has abundant wildlife and access to nature, yet is just a 20 minute drive from larger Orange County communities.
But the things that make Modjeska appealing have also made homes there and in other wildfire-prone parts of California increasingly difficult to insure.
In the last decade, major wildfires in California – and losses in the billions of dollars – have led some big insurance companies to stop writing homeowners policies for many of the nearly 2 million households that are considered at high risk of fire. Allstate Corp, for instance, in 2007 stopped writing new homeowners policies in the Golden State altogether. Others, like Farmers Insurance and State Farm, have become more discriminating about the areas they will insure homes.
Californians who can’t find insurance in the traditional market can purchase limited fire coverage from a state-established consortium of insurance companies.
Yet data shows that many homeowners who have been denied coverage by standard insurers are not flocking to the state plan, which is both more costly and far less comprehensive than traditional homeowners’ policies. Rather, they are increasingly signing up for specialty policies provided by companies best known for insuring unusual risks such as major construction projects, kidnapping or rare art collections. Such policies are still expensive, but offer more coverage than the state plan.
Bonnie Smith, a landscape designer who has lived in Modjeska Canyon since 1981, said the availability of traditional homeowners insurance plans tightened after a 2007 fire destroyed several homes in the canyon.
“People that move in here have a heck of a time getting insurance,” she said.
Allstate canceled Smith’s $1400-a-year homeowners policy in 2012, and Smith considers herself lucky that she was able to find a $2100 policy with Lexington Insurance, the specialty insurance arm of AIG.
And she isn’t the only one. Thousands of Californians in hilly, forested areas have also signed up for such policies in recent years with companies like Lexington, Lloyd’s of London[SOLYD.UL], Nationwide Mutual Insurance Co [NMUIC.UL] unit Scottsdale Insurance Company and Foremost, a division of Zurich Insurance Group AG. So-called surplus line insurers wrote 23,120 homeowners policies in California in 2014, a 91 percent increase from the 12,097 written just two years earlier, according to the Surplus Line Association of California.
“In the past two years it’s really taken off, and most of that is really driven by the fires,” said Andy Fletcher, an insurance broker with Scottish American in Sacramento who connects insurance agents with surplus line homeowners policies.
Fletcher writes about 2500 policies a year, he said, and expects that to climb above 3000 next year after the latest wildfires in Northern California, which destroyed hundreds of homes. About 80 percent of the policies he writes are for homes in high fire areas, he said, adding that they probably cost about twice as much as a standard policy.
Surplus line insurance is meant for higher risks, and insurance brokers must show that they cannot get coverage for their clients in the standard market before they can get a specialty policy.
The companies that offer those policies must be approved by the California Department of Insurance, but their rates are not regulated like those of traditional insurers.
“I have some concerns that the main line insurers are justifying their exit from some areas by the fact that there is a surplus lines market,” said Erin Ryan, principal consultant for the state’s Senate Insurance Committee. “If we see substantial growth in the surplus lines market then there is something wrong. It’s meant to be for unusual situations and unusual risk. Not for your basic homeowners insurance.”
Part of the attraction of specialty policies is they offer more coverage than the state-sponsored program, known as the California FAIR plan. The FAIR plan offers a basic plan that covers fire and will only insure up to $1.5 million for a structure and its contents. That means people have to look elsewhere for other coverage that would normally be included in a standard homeowner’s policy, such as liability for accidents or injury.
The number of policies under the FAIR plan has been flat for the last two years. And nearly 80 percent of the FAIR plan’s 126,000 policies are in urban areas with no wildfire exposure, according to Anneliese Jivan, president of FAIR.
“I’m pretty certain that some of the policies are being picked up by the non-admitted carriers,” Jivan said. “They are not coming to us.”
Randy Ballinger, a retiree who owns a 900-square-foot A-frame house in the Southern California mountain community of Running Springs, said he didn’t even consider the FAIR plan because he heard it was expensive. So when Farmers rejected him, he ended up with a $1200-a-year policy with Foremost.
Ballinger pays slightly less to insure a far larger three-bedroom rental property in a lower-risk part of town with Farmers.
Traditional insurers acknowledge that they are reluctant to insure in some fire-prone areas. “As much of the industry has done, we continue to evaluate wildfire exposure and risk,” said Trent Frager, a spokesman for Farmers Insurance.
For property owners, that can mean fewer choices and higher prices. “It’s killer,” Ballinger said. “I just want to ignore how much I’m paying and be glad I have it.” 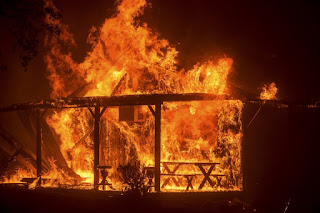