Share
Facebook Twitter LinkedIn StumbleUpon Tumblr Pinterest Reddit WhatsApp Telegram Share via Email Print
Share
But he said Greeks faced a difficult road and recovery from financial crisis would only come through hard work.
Syriza won just over 35%, slightly down on its previous result and still short of an overall majority.
But it will renew its coalition with the nationalist Independent Greeks. Opposition New Democracy gained 28%.
Far-right Golden Dawn came in third with 7%, slightly up on January’s poll.
Syriza was first elected in January on an anti-austerity mandate, but was forced to accept tough conditions for Greece’s third international bailout.
“I feel vindicated because the Greek people have a clear mandate to carry on fighting inside and outside our country to uphold the pride of our people,” Mr Tsipras told supporters in Athens.
“In Europe today, Greece and the Greek people are synonymous with resistance and dignity.
Mr Tsipras was joined at the celebrations by Independent Greeks leader Panos Kammenos.
“Together we will continue the struggle we began seven months ago,” Mr Tsipras said.
Among the challenges facing Mr Tsipras will be satisfying international creditors that Greece is meeting the terms of the latest bailout package worth up to €86bn ($97bn, £61bn). It involved more austerity for ordinary Greeks.
Creditors carry out a review in October and there is still some opposition from within Syriza.
Jeroen Dijsselbloem, who heads the Eurogroup meetings of eurozone finance ministers, said he was “ready to work closely” with the new Greek government.
The Greek electoral system means the party with the largest number of votes wins a bonus of 50 seats – and Syriza will have 145 seats in the 300-seat parliament, only four fewer than in Mr Tsipras’s January victory.
The Independent Greeks party, which is anti-austerity but agrees with Syriza on little else, won 10 seats. New Democracy won 75, Golden Dawn 18.
Mr Tsipras won despite voters’ rejection of austerity in a July referendum. 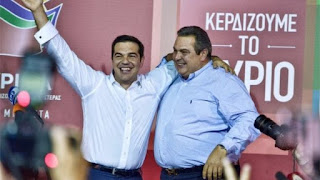 Californians no high-risk insurance market base on Wild fires.

Robert De Niro not out of fashion 'The Intern'