Share
Facebook Twitter LinkedIn StumbleUpon Tumblr Pinterest Reddit WhatsApp Telegram Share via Email Print
Share
U.S. authorities have expanded their investigations into corruption within global soccer and expect to file additional criminal charges, U.S. Attorney General Loretta Lynch said on Monday.
“What I can say is that, separate and apart from the pending indictment, our investigation remains active and ongoing, and has in fact expanded since May,” Lynch said at a news conference alongside Swiss Attorney General Michael Lauber.
“Based upon that cooperation (with Swiss authorities) and new evidence, we do anticipate pursuing additional charges against individuals and entities,” Lynch said.
As part of the separate Swiss investigation, Lauber said his office had seized property and flats in the Swiss Alps in connection with its FIFA probe. 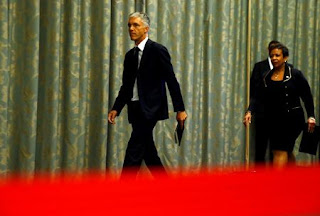