Share
Facebook Twitter LinkedIn StumbleUpon Tumblr Pinterest Reddit WhatsApp Telegram Share via Email Print
Share
U.S. job growth slowed in August, but the unemployment rate dropped to a near 7-1/2-year low and wages accelerated, keeping alive prospects of a Federal Reserve interest rate hike later this month.
Nonfarm payrolls increased 173,000 last month after an upwardly revised gain of 245,000 in July, the Labor Department said on Friday. August’s gain was the smallest in five months as the factory sector lost the most jobs since July 2013.
The jobs count, however, may have been tarnished by a statistical fluke that has often led to sharp upward revisions to payroll figures for August after initial weak readings.
Indicating the hiring slowdown was likely not reflective of the economy’s true health, the jobless rate fell two-tenths of a point to 5.1 percent, its lowest level since April 2008.
In addition, payrolls data for June and July were revised to show 44,000 more jobs created than previously reported, bringing the average job gains for the past three months to a solid 221,000. Average hourly earnings increased 8 cents, the biggest rise in seven months and the length of the average workweek also expanded.
“The payrolls data is certainly good enough to allow for a Fed rate hike in September,” said Alan Ruskin, global head of currency strategy at Deutsche Bank in New York. “The big question is still whether financial market volatility will scupper the plans.”
Investors seemed to agree. U.S. stocks, which could be pressured by higher rates, were trading lower, while yields on U.S. government debt rose. The dollar was little changed against a basket of currencies.
While the mixed report did little to alter views that the U.S. economy remains vibrant despite volatile global financial markets and slowing Chinese growth, it could further complicate the Fed’s decision at a policy meeting on Sept. 16-17.
In the wake of a recent global equities sell-off, financial markets significantly scaled back bets on a September rate hike over the past month. But Fed Vice Chairman Stanley Fischer told CNBC last week it was too early to decide whether the stock market rout had made an increase less compelling.
“With this jobs report … the Federal Reserve finds itself in a real uncertainty jam,” said Mohamed El-Erian, chief economic adviser at Allianz in Newport Beach, California.
MISSING FORECASTS
Economists in a Reuters survey had forecast nonfarm payrolls increasing by 220,000 last month, but they had also warned that the model used to smooth the data for seasonal fluctuations is often thrown off at the start of a new school year.
They said the data could be further muddied because of a typically low response rate from employers to the government’s payroll surveys in August.
But the evidence of a tightening labor market added to a string of upbeat data, including figures on automobile sales and housing, that has suggested the economy was moving ahead with strong momentum after growing at a robust 3.7 percent annual rate in the second quarter.
The decline in the unemployment rate brought it into the range that most Fed officials think is consistent with a low but steady rate of inflation, and would likely bolster their expectation that a pick-up in wages will help lift inflation toward their 2 percent target.
A broad measure of joblessness that includes people who want
to work but have given up searching and those working part-time
because they cannot find full-time employment fell to 10.3 percent, the lowest level since June 2008.
In August, construction payrolls rose 3,000 on top of the 7,000 jobs added in July. Mining and logging employment fell by 10,000 jobs, the eighth straight monthly decline.
The sector has shed 90,000 jobs so far this year, with industries that support mining activity accounting for 80 percent of the drop. Oilfield giants Schlumberger and Halliburton and many others in the oil and gas industry have announced thousands of job cuts this year.
Manufacturing payrolls slid 17,000 as sharp declines at metals, machinery and food industries offset a solid increase in employment in the automobile sector.
The 0.3 percent increase in hourly earnings left them 2.2 percent above their year-ago level, still well below the 3.5 percent growth rate economists consider healthy.
Aggregate weekly hours rose 0.4 percent, the largest gain since November. The combination of more hours and higher earnings left workers with a 0.7 percent increase in their take-home wages.
Some analysts think average hourly earnings are being held back by falling wages in oil field services.
But a tighter labor market and decisions by several state and local governments to raise the minimum wage should eventually translate into faster earnings growth.
A number of retailers, including Walmart, Target and TJX Cos, have increased pay for hourly workers since the start of the year.
“Regardless of which meeting this year the Fed begins to raise rates, next year we expect core inflation to surprise on the upside, forcing the Fed into tightening policy more aggressively than the markets currently anticipate,” said Paul Ashworth, chief U.S. economist at Capital Economics in Toronto. 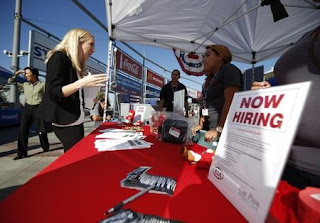