Share
Facebook Twitter LinkedIn StumbleUpon Tumblr Pinterest Reddit WhatsApp Telegram Share via Email Print
Share
Deputies of a county clerk in rural Kentucky issued marriage licenses to three gay couples on Friday after she defied a U.S. district judge’s orders for months because as a Christian she opposes same-sex unions.
With Rowan County Clerk Kim Davis jailed for refusing to follow the orders of U.S. District Judge David Bunning, her deputies processed a marriage license to James Yates and William Smith on Friday. The couple had previously been denied one five times.
Attorneys for Davis have questioned the validity of the licenses, saying she would not authorize her deputies to issue them. Davis’ name does not appear on the licenses issued on Friday.
With people weighing in on both sides, Davis’ jailing has come to symbolize the cultural gap over gay marriage in the United States.
A Reuters/Ipsos opinion poll in the United States this week showed 49.2 percent of those surveyed support same-sex marriages, 36.5 percent oppose them, and 14.3 percent are unsure. The poll had a credibility interval of 2.6 percent.
Davis, who as an Apostolic Christian believes that a marriage can only be between a man and a woman, had refused to issue any marriage licenses under a policy she created after the U.S. Supreme Court in June made gay marriage legal across the United States.
Yates and Smith, who held hands entering and exiting the building, paid $35.50 in cash for the license. Deputy clerk Brian Mason, who had a sign in the office reading “marriage license deputy,” shook their hands and congratulated them.
As Yates and Smith left the building, supporters chanted “Love has won!” Yates said all he wanted to do was hug his parents.
Off to the side, a Davis backer holding a Bible preached against homosexuality.
It was the 100th marriage license issued by the clerk’s office this year and the first one since the Supreme Court ruling.
About two hours later, another couple, Timothy and Michael Long, got their marriage license.
“People shouldn’t have to go through what we’ve been through just to get a basic right,” Timothy Long said.
“SAD DAY IN AMERICA”
In the afternoon, April Miller and Karen Roberts, one of four couples who sued Davis in July for not issuing them licenses, received one. A fourth gay couple planned to obtain a license in the afternoon.
Emotions have run high on all sides as Davis and an attorney for one of the four couples who sued said they had received death threats. The judge also reportedly received a death threat.
Outside the courthouse in Morehead, Kentucky, where the clerk’s office is located, about 40 people demonstrated, far fewer than the 200 protesters on Thursday at the federal courthouse in Ashland, where Davis was found in contempt.
On Friday morning, Davis’ husband stood outside the county courthouse, holding a sign that read, “Welcome to Sodom and Gomorrah.” He said his wife was in good spirits after her first night in jail, adding she had no plans to resign and was prepared to remain in jail for as long as she felt necessary.
Lifelong Morehead resident Michele Kinder, 44, voiced support for the county clerk. “It’s a sad day in America when you can be arrested for your Christian beliefs.”
Bunning did not give a time frame for how long Davis would remain in jail.
Meanwhile, she is waiting for the U.S. Court of Appeals for the Sixth Circuit in Cincinnati, Ohio, to rule on her request to set aside Bunning’s ruling. In denying the request for a stay on the order, the appeals court said there was little chance she would prevail. 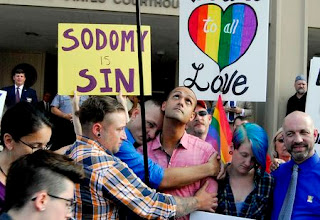 Tech website,Google planing to return back China by fall.