Share
Facebook Twitter LinkedIn StumbleUpon Tumblr Pinterest Reddit WhatsApp Telegram Share via Email Print
Share
Greek leftist Syriza party on Wednesday fell behind its main conservative rivals for the first time since former premier Alexis Tsipras resigned, offering further evidence that his decision to call a snap election could backfire.
Syriza is on course to win 25 percent of votes at the Sept. 20 election while the conservative New Democracy party will win 25.3 percent, a poll by GPO showed. Nearly 13 percent of respondents were still undecided.
It also suggested Tsipras, who led Greece through months of painful bailout talks before eventually capitulating to virtually all the demands set by its international creditors, was less popular than conservative leader Evangelos Meimarakis.
Tsipras had called for new elections in order to silence hardline leftist rebels within his own ranks and win a fresh mandate for tough austerity measures that the debt-ridden country will have to implement in exchange for new aid.
But opinion polls since August suggest support for Syriza has shriveled, raising the specter of yet more instability that could disrupt efforts to implement the bailout program and keep the aid deal, up for review in October, on track.
Tsipras stormed to victory in January promising to end years of austerity and return Greece back to growth, but was forced to backtrack on a string of promises, including that he would end public sector and pension cuts, and halt privatizations.
Previously, polls had suggested Tsipras remained popular with voters because he had at least put up a fight in the bailout negotiations with the European Commission, the European Central Bank and the International Monetary Fund.
“He promised us that he wouldn’t touch pensions and that he would tear up the bailout agreements. He didn’t tear up anything and now he’s put us in a worse position, and the Greek people are going to suffer,” said 72-year-old pensioner Yannis, who did not want to disclose his surname.
More than two-thirds of respondents in the GPO poll said the snap election was unnecessary, while 76 percent said they wanted Greece to stay in the euro zone no matter what.
A second poll by Alco released earlier on Wednesday showed Syriza on 23 percent, slightly ahead of New Democracy on 22.6 percent. The gap between Syriza and New Democracy was 1.5 percentage points in a previous Alco poll released on Sunday. Fourteen percent of voters were undecided.
The far-right Golden Dawn party ranked third with 6.1 percent, followed by the Communist KKE at 5.5 percent, in the Alco poll.
Popular Unity, a party formed by disaffected Syriza members who oppose the latest 86 billion euro bailout deal, drew 3.9 percent of those polled. The Independent Greeks, Syriza’s former coalition ally, will not get enough votes to cross the threshold to enter parliament, the Alco poll showed.
Tsipras has so far ruled out cooperating with the main pro-euro opposition parties — New Democracy, the Socialist PASOK and the centrist To Potami, stoking fears that the country will have to vote again. 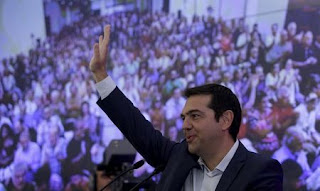