Share
Facebook Twitter LinkedIn StumbleUpon Tumblr Pinterest Reddit WhatsApp Telegram Share via Email Print
Share
Yahoo Inc Chief Executive Marissa Mayer announced she is pregnant with identical twin girls, likely due in December.
Not that it’s going to slow her down much.
“Since this is a unique time in Yahoo’s transformation, I plan to approach the pregnancy and delivery as I did with my son three years ago, taking limited time away and working throughout,” Mayer wrote in a blog post on Tuesday.
Mayer’s pregnancy comes at a critical time for Yahoo, which is preparing to spin off its stake in Chinese e-commerce giant Alibaba Group Holding Ltd and considers the future of its holding in Yahoo Japan Corp.
Mayer, 40, was pregnant when she joined Yahoo as CEO in July 2012 and she gave birth to a baby boy in September that year.
She worked from home after the birth and came back to the office just two weeks later. (http://reut.rs/1PI2jjh)
Her approach to motherhood stoked a debate about whether her example would help or hurt the cause of women in the workplace.
Yahoo said in its corporate blog on Tuesday that it was “extremely happy” for Mayer and supported her plans and approach.
Mayer, who has been married to start-up investor Zachary Bogue since 2009, was an executive at Google Inc before taking the helm at Yahoo in 2012.
Since then she has sought to boost morale at the nearly two-decade-old Internet company, including by increasing the amount of paid leave offered to new parents, bringing Yahoo closer to the policies of some of its Silicon Valley peers.
The changes in 2013 allow new mothers to take up to 16 weeks of paid leave and fathers eight. Previously, mothers could take eight weeks, while no paid leave was offered to fathers.
However, Mayer’s ban on employees working from home in the same year sparked nationwide outrage, with critics saying the policy would make life difficult for working parents.
Media reports that Mayer paid to have a nursery built next to her office further fanned the controversy.
Mayer has a net worth of about $380 million, according to Forbes. Her pay package jumped 69 percent to $42 million in 2014, mostly due to gains in Yahoo’s stock price despite concerns about the health of its business. 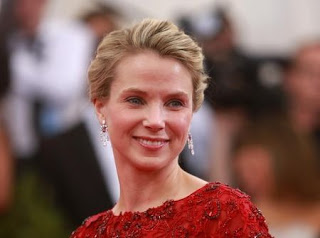