Share
Facebook Twitter LinkedIn StumbleUpon Tumblr Pinterest Reddit WhatsApp Telegram Share via Email Print
Share
Global economic growth is likely to be weaker than earlier expected, the head of the International Monetary Fund said on Tuesday, due to a slower recovery in advanced economies and a further slowdown in emerging nations.
IMF Managing Director Christine Lagarde also warned emerging economies like Indonesia to “be vigilant for spillovers” from China’s slowdown, tighter global financial conditions, and the prospects of a U.S. interest rate hike.
“Overall, we expect global growth to remain moderate and likely weaker than we anticipated last July,” Lagarde said in a prepared speech at the start of a two-day visit to Indonesia’s capital.
The IMF in July forecast global growth at 3.3 percent this year, slightly below last year’s 3.4 percent.
Lagarde said China’s economy was slowing, although not sharply or unexpectedly, as it adjusts to a new growth model.
“The transition to a more market-based economy and the unwinding of risks built up in recent years is complex and could well be somewhat bumpy,” she said.
“That said, the authorities have the policy tools and financial buffers to manage this transition.” 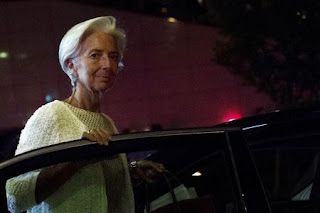