Share
Facebook Twitter LinkedIn StumbleUpon Tumblr Pinterest Reddit WhatsApp Telegram Share via Email Print
Share
A Turkish court on Monday formally charged three employees of Vice News with having links to a terrorist organization, the online news channel said, days after they were detained while reporting from the mainly Kurdish southeast.
Security sources and local media identified the three as two British reporters and their translator. Their arrest is likely to intensify concerns about press freedom as Ankara takes on a bigger role in the U.S.-led coalition against Islamic State in Syria and cracks down on Kurdish militants at home.
“Vice News condemns in the strongest possible terms the Turkish government’s attempts to silence our reporters who have been providing vital coverage from the region,” Kevin Sutcliffe, Vice’s head of news programing for Europe, said in a statement.
“We continue to work with all relevant authorities to expedite the safe release of our three colleagues and friends.”
Security sources and local media said last week that Britons Jake Hanrahan and Philip Pendelbury and their translator were detained in Diyarbakir where they were filming clashes between security forces and Kurdish militants.
The banned Kurdistan Workers Party (PKK) has fought a three-decade insurgency for greater Kurdish autonomy, in which some 40,000 people have been killed. Turkey and the United States consider the group a terrorist organization.
In a statement, the Diyarbakir chief prosecutor said: “Although the suspects were not involved in the terrorist organization’s hierarchy, it was decided that they were arrested for helping the organization willingly”. The chief prosecutor did not name the PKK outright.
Vice News, which has won a large following among younger viewers for its irreverent reportage and documentaries from global trouble spots, has declined to identify the journalists or the translator.
Security sources told Reuters the three were in close contact with the PKK. On his Twitter feed last week, Hanrahan posted photos which he said had been taken in an area of the southeast under the control of the PKK’s youth arm.
The shaky peace process between Ankara and the PKK begun by President Tayyip Erdogan in 2012 has fallen apart over the last month as the government resumed air strikes on PKK camps in northern Iraq and Kurdish insurgents hit police and military targets.
Critics worry that press freedom will be one casualty of the fighting. Turkey languishes near the bottom of international press freedom tables. The European Union, which Turkey aspires to join, has said harassment of the press violates its human rights criteria. 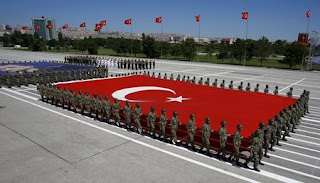 NFL's Brady back in court to fight 'Deflategate'