Share
Facebook Twitter LinkedIn StumbleUpon Tumblr Pinterest Reddit WhatsApp Telegram Share via Email Print
Share
New England Patriots quarterback Tom Brady returned to court on Monday, just days before a federal judge was expected to rule on whether to uphold the football superstar’s four-game “Deflategate” suspension.
The four-time Super Bowl champion and National Football League Commissioner Roger Goodell had been ordered to attend a court hearing in New York before U.S. District Judge Richard Berman, who could decide the case but has pushed for a settlement.
With dozens of news cameras set up outside the courthouse, Brady and Goodell arrived within moments of each other around 9:30 a.m. EDT (1330 GMT). It is likely the two sides planned to meet with Berman privately before the 11 a.m. hearing to discuss any progress toward a deal, although there has been no indication that a settlement is near.
Brady was suspended for four games over his alleged role in a scheme to deflate footballs used in the Patriots’ 45-7 victory over the Indianapolis Colts in a January playoff game. The Patriots’ win sent the team to the Super Bowl, where they defeated the Seattle Seahawks 28-24.
Both sides have asked Berman to rule by Friday, six days before New England’s 16-game season begins in a nationally televised contest against the Pittsburgh Steelers.
At an Aug. 19 hearing, Berman said he planned to meet that deadline but again urged the parties to settle, calling a deal the “logical and rational outcome.” Despite the judge’s involvement in weeks of talks, however, Brady and the NFL have failed to reach a resolution.
The suspension came after Ted Wells, a lawyer hired by the NFL to investigate the incident, concluded Brady was “generally aware” that two Patriots employees had conspired to deflate the balls. An underinflated football can be easier to grip, particularly in cold weather.
Goodell confirmed Brady’s suspension on July 28. The league has filed a lawsuit asking Berman to uphold the suspension, while the players union has sued to contest it.
The union said Brady had no notice that he might be suspended and that Goodell was not an impartial arbitrator, given his praise of Wells’ work before the appeal. The NFL said the league’s collective bargaining agreement gave Goodell authority to hear such appeals.
Should the suspension remain in place, Brady would return Oct. 18 against the Colts. 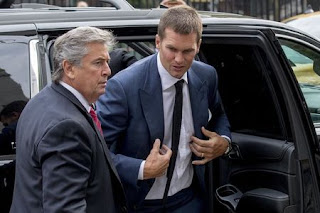