Share
Facebook Twitter LinkedIn StumbleUpon Tumblr Pinterest Reddit WhatsApp Telegram Share via Email Print
Share
The victims of the Nigerian Air Force plane which crashed on Saturday into a residential quarter at Ribadu Cantonment in Kaduna,have been named.
They are: Squadron Leader Adekunle Suara (pilot), wife of Wing Commander N. Hassan, wife of Wing Commander I. B. Musa, Warrant Officer Etim and Air Craft Woman Naomi Adekunle.
The ill-fated aircraft was Abuja-bound.
Squadron Leader Suara is survived by a young wife, who got married to him last year.
According to a statement by the Director of Defence Information, Col. Rabe Abubakar, President  Muhammadu Buhari  described the crash as colossal loss not only to the families but to the nation
“The President spoke through the Permanent Secretary Ministry of Defence, Alhaji Aliyu Ismaila, who was also the head of Federal Government delegation that visited the site of the crash and the families of the victims.
“The President extends his condolences on behalf of the Federal Government and the good people of Nigeria over the unfortunate loss of the officers and men whom he described as gentlemen and intelligent personnel whose loss could not be quantified especially now that their services are much-needed.
“The President prayed for the repose of their souls and also prayed Almighty God to grant the families the fortitude to bear the irreplaceable loss.
” Chief of Defence Staff (CDS), General Abayomi Gabriel Olonisakin, who was also in the Presidential entourage, condoled with the families on behalf of the Armed Forces and described the late officers as fine, loyal and patriotic gentlemen who died gallantly while serving their fatherland.
He said: “Though you are gone, your memories will be with us for a very long time to come”.
A Nigerian Air Force (NAF) Dornier-228 aircraft, with call sign NAF030, crashed into a house at Ribadu Cantonment, Kaduna shortly after take-off.
The highlight of the condolence visit was the observance of a one-minute silence in honour of the departed colleagues and visits to the individual families of the victims.
Some of those on the entourage were the GOC 1 Division, Maj Gen Adeniyi Oyebade, Air Officer Commanding, Training Command, Kaduna, AVM Alkali Mamu, Commandant, Nigerian Defence Academy, Maj Gen MT Ibrahim, Chief of Defence Communications, Defence Headquarters and other senior officers on the entourage of the Federal Government delegation.
The owner of the house on which the chopper crashed, Lt. Col. Grema, narrated how he escaped death.
He told the delegation that: “I came out of my house few minutes before the aircraft fell on my bore hole.  I had not quite shut the door to my house when I heard the noise arising from the crash.”
As at the time of the visit, condolence registers had been opened in the victim’s houses, while some family members were still in shock. The young wife of the deceased pilot, thanked the delegation.
Wing Commander Musa and Hassan said the visit by the top brass team had given them encouragement and courage to raise the children their wives left. They pledged  their unrelenting effort to move the NAF and the Nigeria military forward.
Speaking with reporters after inspecting the scene of the crash, the Permanent Secretary said: “We have lost very able officers and their families and we want to on behalf of the Federal Government extend our condolences to all of them and pray for the repose of their souls.
“With the passion and zeal the president came in with, you will appreciate that he is doing everything possible to address some of these challenges of security in the country. The Nigerian Army, Air force and Navy are all one and he is doing all his best to reposition them to meet global standards.”
He appealed to Nigerians to give Buhari the needed support to move the country forward, saying: “This incident is something that is from God and we should accept it as such, all we can do is pray that when our time come, we die in peace.”
Wife of Wing Commander Hassan left behind four young kids, the eldest is not up to 10. As at the time of the visit, the children were busy playing around the compound. 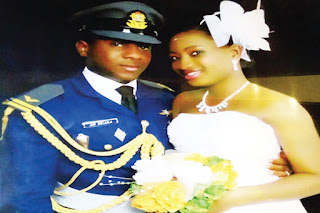