Share
Facebook Twitter LinkedIn StumbleUpon Tumblr Pinterest Reddit WhatsApp Telegram Share via Email Print
Share
The dollar lost ground against the safe-haven yen and the low-yielding euro on Monday as global stock markets began the week in the red, prompting investors to trim bets against currencies popularly used to fund risky carry trades.
Under carry trades, investors sell a low-yielding currency to buy a riskier, higher-yielding ones for better returns. When volatility rises in global financial markets and stocks fall, they tend to take these positions off the table.
European shares fell, with Germany’s DAX and France’s CAC on track for their worst month in four years. Chinese stock markets also fell while Japan’s Nikkei <.N225> dropped.1 3 percent.
Volumes were relatively low in Europe, with London shut for a holiday. If euro zone inflation slows more than expected, the European Central Bank will come under pressure to ease policy further. And with a U.S. increase possible as early as next month, traders said, the dollar’s losses would be limited.
“Stocks markets are in focus and absence of risk appetite is acting as a headwind to the dollar,” said Niels Christensen, FX strategist at Nordea. “Having said that, with a September rate hike back in focus, I am biased towards more downside in the euro against the dollar.”
The dollar index <.DXY>, which tracks the greenback against a basket of six major currencies, was at 95.968, down 0.2 percent on the day and about 1.5 percent lower for the month. It was well above a seven-month low of 92.621 reached a week ago as the prospect of a slowdown in China sent global stocks plunging.
The dollar shed 0.4 percent to 121.20 yen , down about 2.2 percent for August, but well above a seven-month low of 116.15 touched a week ago. The euro rose 0.3 percent to $1.1220 , below last week’s high of $1.1715 but still up 2.4 percent for the month.
Non-farm payrolls data on Friday will provide clues on whether the Fed might raise rates as soon as its mid-September meeting. U.S. business surveys, factory orders and trade data will also be released this week.
The dollar could gain if U.S. data bolsters expectations for a Fed rate rise within weeks, but the focus will be on whether risk sentiment holds up under such a scenario.
“We think September liftoff is not necessarily bad for risk sentiment,” said Tan Teck Leng, FX strategist at UBS Wealth Management in Singapore. Further rate increases by the Fed are likely to occur gradually and Fed Chair Janet Yellen will probably err on the side of dovishness, he said.
“Given this view, we still maintain a view that markets will be risk-friendly, and hence look for further yen and euro weakness versus the dollar,” he said.
Fed Vice Chairman Stanley Fischer said in a speech at the annual central bankers’ meeting in Wyoming on Saturday that U.S. inflation was likely to rebound as pressure from the dollar fades, allowing the Fed to raise rates gradually. 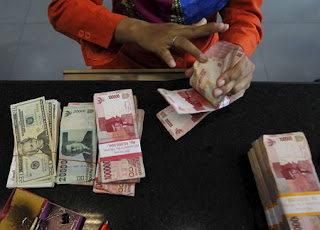