Share
Facebook Twitter LinkedIn StumbleUpon Tumblr Pinterest Reddit WhatsApp Telegram Share via Email Print
Share
The children were taken to hospital in the town of Braunau am Inn on Friday suffering from severe dehydration.
Their discovery came a day after 71 bodies, thought to be migrants, were found on a dumped lorry in Austria.
Several European countries have called for urgent talks on the migrant crisis.
Austrian police said they stopped the minivan in Braunau, which sits on the country’s border with Germany, on Friday and arrested its Romanian driver.
The children – two girls and a boy aged between one and five years old – were said to have been crammed in the back along with other migrants from Syria, Afghanistan and Bangladesh.
Police said they were critically ill and almost unconscious when they were found.
The Bethany Bell in Braunau says they and their families disappeared from the hospital at some point on Saturday.
Authorities believe they may have tried to cross the border into Germany, rather than face deportation back to Hungary.
Separately on Sunday, Hungarian police said they had arrested a fifth man over the deaths of the 71 people who were found in the abandoned lorry in Austria last Thursday.
The man is the fourth Bulgarian to be held over the find near the Hungarian border. The other man is Afghan. Authorities believe the men are low-level members of a human trafficking gang.
Officials said the 59 men, eight women and four children – thought to be mainly Syrians – had probably died of suffocation two days earlier.
It is the latest in a series of tragic events as more and more migrants attempt to reach Europe by land or by sea. A record number of 107,500 migrants crossed the EU’s borders last month.
Some of them pay large sums of money to people smugglers to get them through borders illegally. 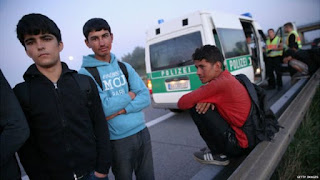