Share
Facebook Twitter LinkedIn StumbleUpon Tumblr Pinterest Reddit WhatsApp Telegram Share via Email Print
Share
A fire at a residential complex in Saudi Arabia has left 11 people dead and injured at least 200 others, Saudi officials say.
They said multiple nationalities were among the injured – some critically.
The fire broke out at a site used to house workers for the oil giant Saudi Aramco in the eastern city of Khobar. The cause is unknown.
Some people were reportedly trapped on rooftops as helicopters battled to control the blaze.
Like many companies in Saudi Arabia, Aramco uses large numbers of migrant workers.
Saudi’s civil defence ministry tweeted: “Cars and furniture caught fire in the basement of one of the towers, heavy smoke billowed, obstructing rescue and firefighting operations.”
Aramco says it has begun an investigation into the cause. 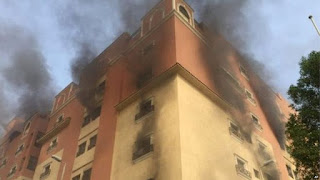 How the truck migrants met their dead end.