Share
Facebook Twitter LinkedIn StumbleUpon Tumblr Pinterest Reddit WhatsApp Telegram Share via Email Print
Share
Hungarian police said on Sunday they had arrested a fifth suspect, a Bulgarian citizen, in connection with the deaths of 71 migrants whose bodies were found in a truck in Austria last week.
The authorities have are trying to tackle human trafficking in Hungary as an unprecedented number of people from the Middle East and Africa fleeing violence and poverty try to reach Europe. Hundreds have died crossing the Mediterranean on rickety boats so far this year.
Three Bulgarians and one Afghan citizen are already under arrest pending an investigation in Hungary. They face up to 16 years in prison for trafficking in Hungary plus murder charges in Austria.
The Bulgarian man was arrested on suspicion of human trafficking, police said in a statement.
No further details were immediately available.
Human trafficking cases are multiplying. Another truckload of refugees, including three children, narrowly escaped death when they were discovered in Austria on Saturday.
French Foreign Minister Laurent Fabius accused eastern European states, notably Hungary, on Sunday of a “scandalous” policy towards refugees going against the values of the European Union, while British Interior Minister Theresa May said Europe’s borderless system was exacerbating a migrant crisis and demanded tighter European Union rules on free movement.
SCALE OF TRAFFICKING
Officials in Hungary say they are dealing with a surge in human trafficking cases. Police filings during the last few days illustrate the sheer scale and the variety of nationalities involved in trafficking operations.
On Sunday, Hungarian police stopped a Romanian truck on a motorway. They found 41 migrants crammed onto the cargo deck. The Romanian man driver was detained.
A Lithuanian man was detained on Saturday when police stopped him outside Budapest with 12 Syrians in his vehicle. The same day, an Austrian citizen was arrested on the motorway between Budapest and Vienna for driving five Syrians, and a Polish citizen was detained for driving seven Syrians in a French-registered car.
On Friday, three Hungarian men were caught transporting 19 Syrians in their van, and on Aug 28, three vehicles with Italian license plates driven by Serbian men, were held up in the early morning hours in a remote rural road in southern Hungary. The lead car, a van and a small truck carried a total of 69 Syrians and 12 Iraqis.
($1 = 0.8946 euros) 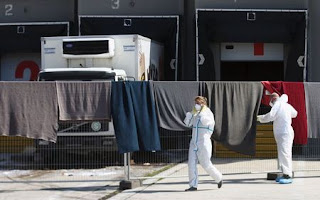 All eyes on wildcard Miley Cyrus for MTV VMA show