Share
Facebook Twitter LinkedIn StumbleUpon Tumblr Pinterest Reddit WhatsApp Telegram Share via Email Print
Share
A student leader of Hong Kong’s pro-democracy demonstrations faced additional charges on Thursday in connection with the storming of government headquarters which helped spark months-long street protests last year.
Joshua Wong, the 18-year-old leader of student group Scholarism, was charged with unlawful assembly and inciting others to participate in unlawful assembly.
He faces two other charges of obstructing police related to a protest in June last year outside the office of China’s top official in Hong Kong and contempt of court. He appears in court on Friday to face those charges.
The latest charges will be heard in court on Sept. 2.
The boyish Wong became the face of last year’s protests demanding open nominations for the election of Hong Kong’s next chief executive in 2017. China, which took back control of Hong Kong from the British in 1997, said it will allow a free vote, but only from pre-screened candidates.
“Being involved in the action to take back Civic Square on Sept. 26 was the best decision I have made in the four years I have been involved in the social movement and student movement,” Wong told reporters, referring to a public area around government headquarters.
“I do not regret it … even if I need to pay the price, go to court and even to jail.”
Wong’s lawyer, Michael Vidler, said Wong had not been formally arrested but “invited” to attend court.
“They decided not to arrest Joshua but simply charge him today. He’s actually not on police bail, they’ve just invited him to attend court on Sept. 2,” Vidler said.
“I must say, in the 20-odd years I’ve been in Hong Kong, I’ve never had a situation like this.” 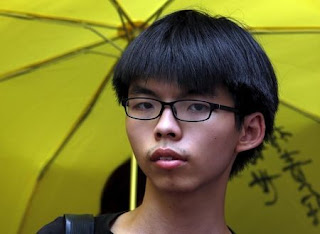