Share
Facebook Twitter LinkedIn StumbleUpon Tumblr Pinterest Reddit WhatsApp Telegram Share via Email Print
Share
Chinese stocks plunged more than 8 percent on Monday in panic selling, with flagship indexes smashing key support levels and posting their biggest one-day percentage losses since the height of the global financial crisis in 2007.
The latest tumble, which wiped out what was left of market gains this year, was rooted in investor disappointment that Beijing did not announce expected policy support over the weekend after China’s main market indexes shed 11 percent last week.
The blue-chip CSI300 index <.CSI300> tumbled 8.8 percent, to 3,275.53, while the Shanghai Composite Index <.SSEC> lost 8.5 percent, to 3,209.91 points, putting it back where it began 2015.
All index futures contracts <0#CIF:> <0#CIC:> <0#CIH:> slumped by their 10 percent daily limit, reflecting tumbling share prices and pointing to more bad days ahead.
“It’s difficult to judge whether investors are overreacting, or whether the market is near its bottom,” said Alex Kwok, analyst at China Investment Securities in Hong Kong, noting that economic fundamentals remained weak and investor sentiment battered.
“This is already a small-scale stock market disaster. Any rebound, if there is any, could be just technical.”
With main indexes falling well below July 9 lows – hit during the height of the recent market rout and widely seen as a key level the government wants to defend – retail investors, many of whom expected monetary loosening policies over the weekend, are disillusioned.
“I regret not having fled the market last week,” said a retail investor who identified herself only by her surname, Zhang.
“With the market falling like this, there’s no hope at all. It’s already a bear market and the government is responsible,” she said.
Monday’s fall spanned every corner of the market, with small-cap growth stocks and state-owned blue chips declining at roughly equal paces.
At the end of the day, only 16 companies trading in Shanghai and Shenzhen were in positive territory. Over 2,000 stocks, or 80 percent of the total, were down by the 10 percent daily limit, according to Reuters calculations. 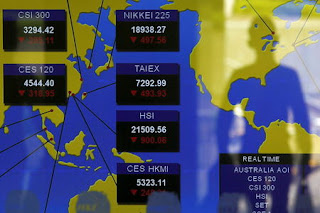