Share
Facebook Twitter LinkedIn StumbleUpon Tumblr Pinterest Reddit WhatsApp Telegram Share via Email Print
Share
Britain needs to remain cautious in its relations with Iran, Foreign Secretary Philip Hammond said on Monday, after he reopened the British embassy in the country nearly four years since protesters stormed the compound in Tehran.
The historic step marks a thawing of relations between the Islamic state and Western powers, but Hammond told the BBC that there was still disagreement on major issues.
“We should tread carefully. There’s a deep legacy of distrust on both sides and we have major areas where we have very substantial policy differences.”
However he said both countries saw “eye to eye” on the need to tackle Islamic State militants but conceded there was a disagreement on human rights issues in Iran. 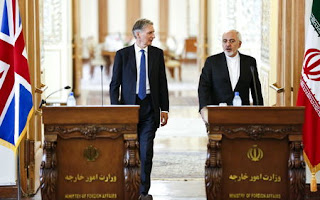