Share
Facebook Twitter LinkedIn StumbleUpon Tumblr Pinterest Reddit WhatsApp Telegram Share via Email Print
Share
Commodity markets tumbled along with Asian equities on Monday as fears spread that a severe slowdown in China would pull down other economies in the region, denting energy and raw material consumption.
Chinese stocks sank more than 8 percent this morning, with the Shanghai index giving up all its gains for the year, prompting a broader selloff in riskier assets, including oil and copper which slid to their weakest since 2009.
“Stock markets are often said to be leading indicators of the global economy. Given how equity markets have slumped in the past couple of weeks and months, it may be an ominous foreboding of things to come,” Singapore-based Phillip Futures said.
In oil markets, the U.S. West Texas Intermediate (WTI) and Brent marked fresh six-year lows, falling to levels last seen during the peak credit crunch of 2009.
WTI traded well below $40 a barrel and Brent fell under $45 per barrel by 0620 GMT (0220 EDT). With prices down 60 percent from 2014 highs, revenues for oil exporting countries are being hammered.
“The continued fall in oil prices and uncertainty about China’s growth prospects have added further downside risks to Saudi Arabia’s macroeconomic outlook,” Barclays said about the world’s top crude exporter, which has been forced to issue bonds and eat into its foreign reserves to cover a huge budget deficit.
In coal, the most common source for electricity generation, API2 2016 futures already hit 12-year lows last week, and physical prices for cargoes from Australia’s Newcastle or South Africa’s Richards Bay terminalsare back to levels last seen before the 2008/2009 boom and bust.
Analysts said further downward price adjustment might come.
“Global investor sentiment dipped in August to the lowest level since we started the survey,” Morgan Stanley said, adding that an adjustment process would be long and painful.
In metals, copper and aluminum hit their lowest since 2009 on Monday, while iron ore and steel futures in China slid sharply to reach their downside limit. [IRONORE/]
Australia’s Fortescue Metals Group said its annual profit slumped 90 percent, the latest iron ore miner to report sharply lower earnings on weak prices for the steelmaking ingredient as China’s economy slows.
The rout has also spread to sectors that have so far been performing well. The MAC global solar index <.SUNIDX>, which soared in early 2015, has almost halved in value since April, pulled down by the tumbling Chinese stock markets. 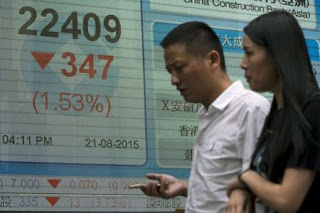