Share
Facebook Twitter LinkedIn StumbleUpon Tumblr Pinterest Reddit WhatsApp Telegram Share via Email Print
Share
Duro Ikhazuagbe
After winning two medals, a silver in the (long jump) and a bronze in the 200m at the last edition of the IAAF World Championships in Moscow, Russia two years ago, Blessing Okagbare-Ighoteguonor, will this weekend at the Bird’s Nest Stadium in Beijing begin her quest for a gold medal that no Nigerian athlete, male or female has ever achieved.
Interestingly, it was at the same stadium, a rookie Okagbare earned an Olympic long jump bronze medal in her very first outing at the Games held in 2008.
Sadly, the star of the Nigerian team to the 2015 edition starting tomorrow in China would not be competing in the jumps when events begin on Sunday. Not even Ese Brumeh, the fellow Delta girl Okagbare mentored will be on parade. Since winning the Glasgow Commonwealth Games long jump with 6.68m in the absence of Okagbare, Brumeh has been unable to reenact  the form that made her the best in the former British Empire Games.
This season, Okagbare has had a couple of races in the IAAF League circuit with her best in the 100m. Now that she has dumped the long jump, where most aficionados of the sports believe her chances of a gold looks brighter than the 100m, 200m and the 4x100m she has opted for at this edition, It remains to be seen how she hopes to fulfill this dream.
Olympic and world champion, Jamaican Shelly-Ann Fraser-Pryce is no stranger to her. The other contenders like Tori Bowie, Michelle-Lee Ayhe and Veronica Campbell-Brown are equally familiar faces. How she dusted the field made up of these superstars of the short sprint in the Diamond League in Shanghai, China remains ever fresh. She can do it again if she finds the condition favourable like it was two years ago in Moscow. The memories of placing a disappointing sixth in the 100m can be wiped if she gets her act rightly in the 200m. Okagbare’s greatest problem has been her erratic start from the block.
The burden of Africa picking a sprint medal is not Okagbare’s problem alone. Ivorian Murielle Ahoure two years ago in Moscow shocked the packed field, snatching precious silver medals in the sprints.
The Ivorian who at the 2013 Worlds won double silver medalists in the 100m and the 200m, will also pose a serious threat as evinced by her trio of top-three finishes at IAAF Diamond League meetings this year and a national record of 10.81 in Eugene (USA) in May. The hope of Africa winning medal of any colour in the sprint rests squarely on the shoulders of the duo
Despite all the hopes, Fraser-Pryce remains the star to beat in this game. She has returned to her best this season as she hunts what would be an unprecedented third women’s 100m world crown.
The 28-year-old Jamaican sprinter, who also owns two Olympic 100m titles, was a distant fifth in her opening 100m race of the season in Shanghai but has bounced back since with 100m wins at the IAAF Diamond League meetings in Eugene, Paris and Stockholm.
As a further measure of the diminutive sprinter’s dominance, she has posted the fastest time in the world this year, a blistering 10.74 clocking in the French capital, and the joint second-fastest time with a 10.79 clocking in Kingston.
However, apart from Okagbare and Ahoure, a whole cluster of other quality athletes lie in wait should Fraser-Pryce falter in her bid to add to her world 100m crowns won in 2009 in Berlin  and Moscow 2013.
The three-pronged US challenge is headed by national champion Bowie, who emerged as a world-class sprinter in 2014. The 24-year-old blitzed to a 10.81 clocking to take the national title in Eugene in June – within 0.01 of her lifetime best – and it will be interesting to see how she performs in what is her major championship debut as a sprinter.
Joining her on the US team will be English Gardner, the second-fastest woman in the world this year at 10.79. Two years ago at the 2013 World Championships, Gardner finished just 0.03 outside the medals in fourth and will be seeking a better result inside the Bird’s Nest Stadium.
The US trio is completed by unheralded 21-year-old Jasmine Todd, who proved she is no slouch by running a personal best of 10.92 to qualify. 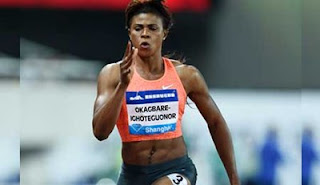