Share
Facebook Twitter LinkedIn StumbleUpon Tumblr Pinterest Reddit WhatsApp Telegram Share via Email Print
Share
Allyson Felix will not decide whether to try a sprint double at next year’s Rio de Janeiro Olympics based on her performance at the Beijing world championships, she said on Friday.
The Olympic 200m gold medalist will be moving up to the 400m for Beijing with the possibility of doing both at the Rio Games, schedule permitting.
“I would love to have the opportunity to have the choice to be able to do it regardless of what happens here,” Felix said at a U.S. news conference.
“As of now I think the schedule is like it is here so it is something we will have to see.”
Felix decided not to try the 200-400m double in Beijing because she would have needed to run the 400m final an hour after the semi-finals of the 200m on Aug. 27. The 200m final is the next day.
The schedule for the 2016 Olympics, as announced by the IAAF, is not much friendlier.
The most decorated female in athletics history would have to compete in the first round of the 200m 75 minutes before the 400m final under the current Rio schedule.
She and coach Bob Kersee chose to run the 400m over the 200m at the world championships because of the challenge.
“It was definitely very difficult (decision),” she said. “I think everybody knows I love the 200. So to think of going to a championships and not being in it is difficult.
“I can’t even imagine when I have to watch and see results, and just wishing I could be in it.
“But I do feel like it was time to step up.”
The 400 does not come as natural, though.
“The most difficult part is being patient,” Felix said. “I am a true sprinter and I like to go fast all the time.
“So when you try to slow me down, the strategy is a little different to really lock into that. I think with experience I (will) become more comfortable with that.”
Winner of 17 global medals, 13 of them gold, Felix missed out on any medal at the 2013 world championships after pulling up in the 200m final with a hamstring injury.
There will be an opportunity for three more in Beijing.
Along with the 400m, Felix is planning to run both the 4×100 and 4×400 meters relays. 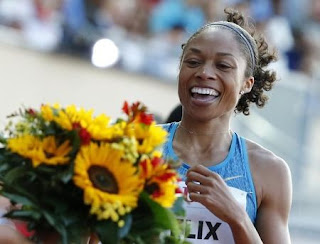 American Simpson calls on IAAF to clean up doping