Share
Facebook Twitter LinkedIn StumbleUpon Tumblr Pinterest Reddit WhatsApp Telegram Share via Email Print
Share
American middle distance runner Jenny Simpson is convinced a tough anti-doping regime helped her win the 1,500m world title in 2011 but that drug cheats prevented her from even reaching the final at the London Olympics a year later.
On the eve of the start of the IAAF’s biennial world championship showpiece in Beijing, the 28-year-old called on the governing body of world athletics to bolster efforts to rid the sport of the problem.
Outgoing IAAF President Lamine Diack admitted on Thursday that his sport was in crisis after spending a month defending its record on doping in the wake of embarrassing leaks of test data to two media organizations.
Simpson is in China to try and win back the title she claimed as a surprise winner of the 1,500m in the South Korean city of Daegu in 2011.
“I remember arriving in Daegu and every athlete being drug tested and I remember being really excited to see that development in our sport,” she told the U.S. team news conference on Friday.
“Deep in my heart, I believe that’s why I was successful in 2011.”
Diack remains convinced that 99 percent of athletes are clean but that was not close to being the case in the women’s 1,500m final at the London Olympics.
Of the 10 women who finished the race, three have since had their results quashed for doping offences.
Turkey’s Asli Cakir-Alptekin was stripped of the gold medal and banned for eight years only last week because of abnormalities in blood samples she provided.
“Moving onto 2012,” Simpson added. “I believe what we’re seeing now is a demonstration of a really unfortunate thing where people in the final kept clean athletes like myself from advancing to the final.”
“Those sorts of situations are really unfortunate to see in our sport,” she added.
“But my job today as an athlete is to train and to be prepared to the best of my ability and I certainly support and encourage the governing bodies that in charge of regulating athletes to really step it up and help catch people.
“So I am here to race and to beat everyone on the track and to encourage the effort to really clean things up.” 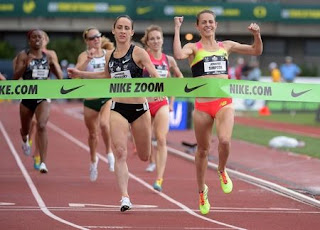 Felix's 400m race will not determine her Olympic plans