Share
Facebook Twitter LinkedIn StumbleUpon Tumblr Pinterest Reddit WhatsApp Telegram Share via Email Print
Share
he Chicago White Sox broke open a tie game with a five-run fifth inning Thursday, and they salvaged the final game of a four-game series with an 8-2 win over the Los Angeles Angels.
The White Sox scored just four runs total in losing the first three games of the series, but they bettered that in one decisive inning Thursday night at Angel Stadium.
Chicago collected six hits in the inning, as well as a sacrifice fly on which Angels left fielder Shane Victorino overthrew the cutoff man, allowing the other two baserunners to advance to second and third.
Angels starter Nick Tropeano, taking the rotation spot of Matt Shoemaker, who was demoted to Triple-A Salt Lake earlier in the week, didn’t survive the fateful fifth. Tropeano (1-2) went 4 1/3 innings and was charged with six runs on eight hits and one walk.
Center fielder Adam Eaton, third baseman Tyler Saladino, first baseman Adam LaRoche and catcher Geovany Soto each had two hits for Chicago, which ended a seven-game road losing streak.
White Sox starter Jose Quintana (7-10) gave up two runs on eight hits and two walks in six innings. He earned his first victory in August after two no-decisions and a loss.
Chicago relievers Nate Jones, Nate Petricka and Dan Jennings each threw a no-hit inning to close out the win.
With the loss, the Angels missed a chance to move closer to the first-place Houston Astros in the American League West, instead remaining 2 1/2 games back. Because the Baltimore Orioles also lost, the Angels maintained a half-game lead for the second AL wild-card spot.
The White Sox are six games behind the Angels in the wild-card race.
The final hit of Chicago’s big inning was the result of a replay challenge.
Designated hitter Jose Abreu’s fifth-inning liner down the left field line initially was ruled foul, but the replay clearly showed the ball hit the foul line. Abreu was awarded a double, driving in two runs and knocking Tropeano out of the game.
The Angels cut the deficit to 6-2 in the bottom of the fifth on an RBI single by designated hitter Albert Pujols.
The White Sox took a 1-0 lead in the first inning off Tropeano. Eaton hit a leadoff double. Saladino sacrificed the runner to third, and Eaton scored on a groundout by Abreu.
The Angels matched the run in the bottom of the first against Quintana. Victorino led off with a single. Victorino was going on a 3-1 pitch to center fielder Mike Trout, who ripped a liner off the wall in right-center field for an RBI double. 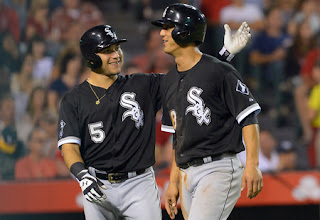 BASEBALL: Twins' offense breaks out in win vs. Orioles