Share
Facebook Twitter LinkedIn StumbleUpon Tumblr Pinterest Reddit WhatsApp Telegram Share via Email Print
Share
The Minnesota Twins offense never stopped hitting Thursday while starter Tyler Duffey kept the Baltimore Orioles from doing much on offense. That combination helped the Twins snap a three-game losing streak in style.
Miguel Sano and Eduardo Escobar both homered, and rookie starter Duffey threw 7 2/3 solid innings as the Twins rolled to a 15-2 victory over the Orioles in the opener of a four-game series.
The game was delayed by rain for 2 hours, 31 minutes at the start, but that didn’t affect Duffey (2-1), making just his third major league start. He gave up only three hits in the first six innings before fading late and allowing a total of 10 with just two runs overall while really throwing the Orioles off with his sharp curveball.
“They had a lot of trouble with that breaking ball,” Twins manager Paul Molitor said “He kept it down. It started flattening a little bit toward the end after some of the long innings he was on the sidelines there. But yeah, just hit his spots with his fastball. And the curveball was really good.”
Duffey got his first major league win in his last start on Aug. 15, holding the Indians to just one hit in six shutout innings.
He employed the curve in the right times during this game, often finishing off Baltimore hitters with it. Duffey struck out eight without a walk.
“For the most part it is always my put-away pitch,” Duffey said. “It’s just one of those things where if they are swinging it I’m going to keep throwing it.”
The Twins (60-61) finished with a season-high 15 runs. They also banged out 18 hits, one short of their season high in that category.
Sano, catcher Kurt Suzuki, third baseman Trevor Plouffe and left fielder Eddie Rosario each had two-run hits.
Suzuki’s two-run single sparked a five-run second inning that gave the Twins early control and a 5-0 lead.
Shortstop Escobar (RBI double) and second baseman Brian Dozier (RBI single) also helped in that frame. Escobar later added a solo homer in the ninth
The homer from designated hitter Sano in the fifth gave the Twins their final two runs off Orioles starter Miguel Gonzalez. Plouffe added a two-run double later while Rosario pitched in with his two-run single during a five-run eighth that stretched the lead to 14-0.
The Orioles (62-58) scored both of their runs in the eighth thanks to RBI singles from right fielder Gerardo Parra and first baseman Caleb Joseph.
Gonzalez (9-9) continued his recent struggles. The right-hander allowed seven runs on eight hits in five innings and now has lost three in a row and gone five starts in a row without a victory.
“His command got away from him,” Orioles manager Buck Showalter said. “He was wild in the strike zone and you do it against any major league team, you’re going to pay a price. He got some things in his favor and he just couldn’t finish them off.”
The Twins quickly took command after the long rain delay. Minnesota batted around in the second and scored those five runs on five hits off Gonzalez.
Right fielder Torii Hunter started it with a bases-loaded walk for a 1-0 lead. Suzuki followed with a two-run single on the next pitch, and Escobar then doubled in a run to put the Twins up 4-0.
One out later, Dozier lined an RBI single to left for a 5-0 lead, but left fielder Henry Urrutia of the Orioles threw out Escobar at the plate to prevent further damage. Gonzalez needed 40 pitches to get through the inning.
Gonzalez settled down after that but then gave up Sano’s two-run homer in the fifth, a blast that gave the Twins a 7-0 lead. They added two more in the seventh plus five in the eighth to break it open, and the Orioles said they’ll just move on.
“They just hit the ball tonight,” said Baltimore designated hitter Steve Clevenger, who went 1-for-4. “They came to play. We’re not going to dwell on it. (We’ll) come back tomorrow, and we’re going to be ready to play.” 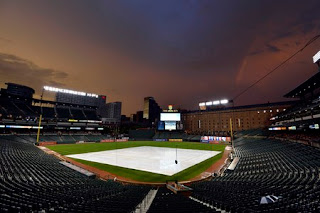 Hook Your Self With African Fashion In Style