Share
Facebook Twitter LinkedIn StumbleUpon Tumblr Pinterest Reddit WhatsApp Telegram Share via Email Print
Share
South Africa’s parole review board has up to four months to conclude its decision on when Oscar Pistorius can be released from prison, a Justice Ministry spokesman said on Thursday.
Paralympic gold medalist Pistorius, 28, was due to be released into house arrest on Friday after serving 10 months of a five-year sentence for killing his girlfriend, model and law graduate Reeva Steenkamp, on Valentine’s Day 2013.
Justice Minister Michael Masutha, however, on Wednesday blocked his proposed release because he said the decision was made without legal basis.
Masutha said the parole board had wrongly taken a decision to release Pistorius on parole before the athlete had served a sixth of his sentence, as required by law.
“The review board has four months in which to conclude the matter,” Justice Ministry spokesman Mthunzi Mhaga told Reuters.
“The minister cannot determine how they deal with the review as he merely referred the matter and leaves it to them to deal with it independently.”
A spokeswoman for Pistorius could not be reached for comment.
Pistorius, nicknamed “Blade Runner” because of the carbon-fiber prosthetics he used during his career on the track, admitted killing Steenkamp by firing four shots through the locked door of a toilet cubicle, saying he believed an intruder was hiding behind it.
Judge Thokozile Masipa said during sentencing the state had failed to convince her of Pistorius’ intent to kill when he fired. Prosecutors want the verdict of culpable homicide, equivalent to manslaughter, changed to murder because they argue Pistorius must have known when he fired that the person behind the door could be killed. 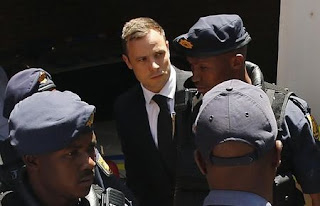