Share
Facebook Twitter LinkedIn StumbleUpon Tumblr Pinterest Reddit WhatsApp Telegram Share via Email Print
Share
A Pakistani court on Thursday banned an Indian film about the 2008 Mumbai attacks in response to a petition filed by the man New Delhi accuses of masterminding the killing of 166 people over three days.
Hafiz Saeed, the founder of Lashkar-e-Taiba which the United Nations has listed as a terrorist organization, petitioned the court to ban the Kabir Khan-directed feature film “Phantom” on the basis that it maligns Pakistan and vilifies Saeed and his current organization, Jamaat-ud-Dawa.
The Lahore High Court issued a ban on Thursday, Saeed’s lawyer said.
“The government has been told that the film should not be presented for showing in Pakistan and to take necessary steps in this regard,” lawyer AK Dogar told Reuters.
In its reply to the petition in court, the Pakistani government “vehemently denied” that there were ever any plans to screen the Indian film.
Lashkar-e-Taiba (LeT) is banned in Pakistan but tolerated unofficially. Saeed has long abandoned its leadership and is now the head of its charity wing, Jamaat-ud-Dawa.
India says it has handed over evidence against him to Pakistan which should have detained him. The issue has stood in the way of rebuilding relations between the nuclear-armed neighbors.
The United States has also offered $10 million for information leading to the arrest and conviction of Saeed, who denies any involvement in the Mumbai attacks.
Saeed lives freely in the city of Lahore in a villa with police stationed outside.
“Phantom” is described as a political thriller set in aftermath of the Mumbai attacks and features Bollywood stars Saif Ali Khan and Katrina Kaif opposing a villain named “Harif Saeed”.
Yahya Mujahid, spokesperson for Hafiz Saeed and Jamaat-ud-Daw, applauded Thursday’s court ruling.
“This film was calling for an attack on Hafiz Saeed, and this was clearly terrorism on the part of India, to release such propaganda. So we think the High Court has given a very good decision on this.” 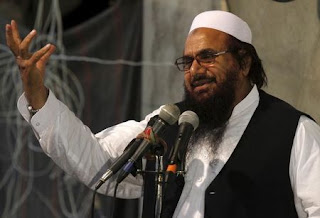