Share
Facebook Twitter LinkedIn StumbleUpon Tumblr Pinterest Reddit WhatsApp Telegram Share via Email Print
Share
By Segun JamesIn a tidal wave of defections Saturday in Yenagoa, the Bayelsa State chairman of Peoples Democratic Party, Col. Sam Inokoba (rtd), left the party with over 1, 000 members and joined the All Progressives Congress at a rally attended by a massive crowd of jubilant residents from across the state. The defections, coming about three months to the governorship election in the state of former President Goodluck Jonathan, involved the cream of the political class. Jonathan was PDP’s candidate at the presidential election in March.
Among key members of PDP that defected to APC during the mega rally held at the main bowl of the Samson Siasia Sports Complex were former managing director of Niger Delta Development Commission, Chief Timi Alaibe; Senator Heineken Lokpobri; former Federal Permanent Secretary, Dr Imoro Kubor; former Bayelsa State Heads of Service, Hon. Obegha Oworibo and Mrs Gloria Izonfou; former commissioners in the state, Chief Lionel Jonathan-Omo and Mrs Charity Vadalego; and former member of the House of Representatives, Dr Stella Dorgu.
Others included former NDDC chairman, Dr Tarila Teepebah, Senator John Brambrayefa, Mrs Vivian Imananagha-Ere, Chief Fred Ekiyegha, Chief Alex Ekiotenne, Chief Ebitimi Amgbare, Capt Matthew Karimo (rtd), and Major Andrew Oputa (rtd.).
The appearance of Inokoba, who had been at loggerheads with Governor Seriake Dickson, at the rally took many people unawares, as the Board of Trustees of PDP had only two weeks ago ordered his reinstatement as state chairman following his suspension by the state executive committee.
Yenagoa practically emptied into the Samson Siasia Sports Complex as the national leadership of the APC led by the national chairman, Chief John Odigie-Oyegun, welcomed the new members into the party. An elated Odigie-Oyegun declared that with the quality of defectors, the ruling party in the state had been decapitated.
The APC national chairman declared, “Who is left in the PDP now? Nobody! The people in Bayelsa are making history for the South-south zone. The APC leaders in Bayelsa State are very loyal and fought gallantly against the false claim that ‘it is our own.’ When they overcame such false campaign, their eyes opened and they saw recklessness, under-performance, and failure. It was only Edo that survived their onslaught. Can we allow ourselves to lose out? When we vote, we bring back Bayelsa to the mainstream of politics.”
Odigie-Oyegun was accompanied by APC national officers, including the deputy national chairman for South-west and former governor of Ekiti State, Chief Segun Oni.
In his speech, the state leader of APC and former governor of the state, Chief Timipre Sylva, said the defections to APC were a reunion of brothers and sisters.
“Today, APC is complete. We have had too much division and the division was created by parochial people. We have seen enough of division,” he said.
Sylva called the PDP government in the state a failed administration.
“The PDP has been decapitated at the national level. Development was not brought to us during their time in office. The East-West road was abandoned. If they claim we should vote for the PDP, they should show us roads. If they cannot show us, they should vote for APC,” he said.Speaking earlier, Alaibe said the defection of notable members of PDP to APC showed that the needed change in the state had come.
“This is common sense revolution. It is not change for the sake of it. We are changing from poverty to prosperity. We are changing from lies and deceit. We are changing from ‘Wayo’. A state as rich as Bayelsa cannot tolerate poverty. It is not our portion that our streets show poverty. How can one provide oil and gas and not benefit from it. Change has come to Bayelsa,” Alaibe said.
In his own comments, Inokoba said the PDP administration under the leadership of Dickson had witnessed misrule and abandoned good governance. “The labour of our forefathers has been rubbished. Bayelsa restoration has become retrogression. Bayelsa PDP has become the ‘Fuji House of Commotion’. Instead of development, we have witnessed disrespect to the elders in the state.”
Lokpobri alleged that PDP in the state had died, saying its burial date is December 5, when the governorship poll will hold.
“Today, we have killed the PDP and have fixed its burial date for December 5. That date will not change. We are keeping a date with history,” Lokpobri said.
But PDP in Bayelsa State yesterday said the defections were a huge disappointment and an embarrassment to the party and the Ijaw nation. The party said the defectors were ditching the party that made them what they were. A statement by the acting state chairman of PDP, Serena Dokubo-Spiff, described the defectors as “yesterday’s men and women” who no longer have electoral value.
Dokubo-Spiff stated, “The PDP in Bayelsa State is intact. All the structures and organs of the party at all levels are fully intact. Our great party is not perturbed in any way.  The so-called defectors were never with us because they are the same people who betrayed PDP at the presidential election and also sponsored candidates against our party in the state House of Assembly election. These are spent forces and we are not moved by APC’s charade.” 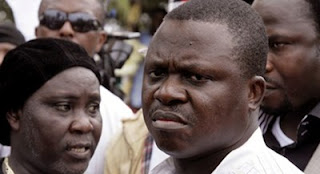 Before handing over 'Jonathan' shortchanged Buhari