Share
Facebook Twitter LinkedIn StumbleUpon Tumblr Pinterest Reddit WhatsApp Telegram Share via Email Print
Share
Damilola Oyedele
The House of Representatives member for Amuwo Odofin Federal Constituency, Hon. Oghene Emma Egoh (Lagos PDP) has raised the alarm over the deplorable condition of FESTAC and Satellite towns with a near absence of critical infrastructure.
He also appealed for the urgent rehabilitation of the National Stadium in Lagos.
Addressing a press briefing in Abuja, Egoh described the situation in FESTAC as a looming disaster if the Federal Housing Authority does not quickly move in to fix the sewage lines and water systems.
“This estate has been built for over 40 years and as we speak, there are no functional infrastructure. Today, the Federal Government collects tenement rates from residents in FESTAC while the Lagos State government also collects land rates,” he said.
“There is no single fire fighting vehicle left in the place. God forbid, if there is any fire incident, it will be a total disaster. So given its importance as one of the oldest housing estate and satellite towns in Lagos, I had to speak to my colleagues to support the motion and they saw reasons with me; as many of them lived there and still have relations there”, Egoh added. 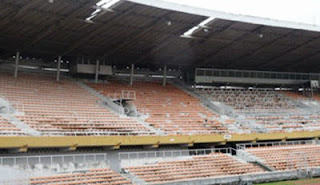 Three people killed in a two-plane collision near San Diego