Share
Facebook Twitter LinkedIn StumbleUpon Tumblr Pinterest Reddit WhatsApp Telegram Share via Email Print
Share
Ekiti State Governor, Mr Ayodele Fayose, has told  President Muhammadu Buhari  that the visit of the former Head of State, General Abdulsalami Abubakar-led National Peace Committee, tactically told him to tread cautiously and be mindful of the fact that he is not heading a military government.
The governor, who restated that he can’t be intimidated by anyone, however, hinted that  he was not unaware of a sinister plot to destabilise his government because of his strong and truthful stand on national issues, vowed not to be cowed by threat from any quarter.
In a statement by Fayose’s  Special Assistant on Public Communications , Lere Olayinka in Ado Ekiti on Sunday, the governor said; “opposition is one of the roots on which democracy stands and any President or Governor that does not want opposition will eventually become a dictator 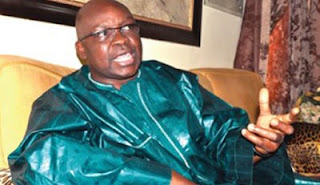