Share
Facebook Twitter LinkedIn StumbleUpon Tumblr Pinterest Reddit WhatsApp Telegram Share via Email Print
Share
President Muhammadu Buhari has given the military chiefs three months to end the Boko Haram insurgency in Northeastern Nigeria.
He gave the charge just as word got out that 17 members of the Islamist sect were killed on Wednesday by local vigilantes in a Borno village.
The president gave the marching order yesterday at the State House in Abuja while decorating the recently promoted service chiefs with their new ranks.
The decorated service chiefs – General Abayomi Gabriel Olonishakin, Chief of Defence Staff; Lt-General T.Y. Buratai, Chief of Army Staff; Vice Admiral Ibok-Ete Ekwe Ibas, Chief of Naval Staff; and Air Marshal Sadique Abubakar, Chief of Air Staff – were appointed on July 13 and confirmed by the Senate on August 4.
Buhari, who was joined by Vice-President Yemi Osinbajo, also called on the Armed Forces to respect and protect the rights of civilians and combatants while carrying out their duties, and urged them to brace up to the challenge of the insurgency.
Apart from asking the service chief to end the insurgency in three months, the president also charged them to ensure that banditry, kidnapping and other forms of criminality are phased out within this period.
He said: “The activities of these misguided groups and individuals have resulted in wanton destruction of lives and properties of our citizens as a disruption of socio-economic lives of millions of Nigerians.
“You need to brace up and continue to team up with other stakeholders to come up with a well coordinated joint effort which will bring the desired end to the insurgency within three months.”
The president also charged the military chiefs to be accountable for both the men and equipment placed under their command in the course of carrying out their assignment.
“Your troops welfare must be uppermost in your mind, take care of them and make available what is due to them,” he said.
The president asked the service chiefs to re-professionalise the military and ensure troops are well trained and equipped before going to battle.
He said: “You should also ensure that they abide with the newly enforced rules and relations of international standards while carrying out their assigned tasks.
“In particular, you must protect innocent civilians and respect the rights of combatants. This no doubt will earn the support of local communities and the respect of our allies and support of the international community.”
The president directed the military chiefs to “get back to work and make Nigerians proud”.
He assured them of unflinching government support by providing all the resources the soldiers would need to succeed.
Buhari, who appointed the new military chiefs after he dismissed their predecessors, said he considered only merit in making the appointments.
“Therefore I have no doubt in my mind that all of you are equal to the task ahead of you. You must acquaint yourselves and justify the honour done to you,” he declared.
He reminded them of the efforts he had been made to garner international support for the war against the insurgents and asked them to complement the efforts.
He said: “I have been to several countries with the sole aim of canvassing for global support to eliminate terrorism from Nigeria.
“These efforts which include establishment of the Multinational Joint Task Force (MNJTF) should be complemented by you.”
Meanwhile, 17 members of the Boko Haram terror group were killed on Wednesday evening by a youth vigilante group in Lahou village, Borno State.
Speaking to THISDAY from the village, near Ngulde in Askira-Uba Local Government Area, the leader of the youth vigilante group in the council, Apagu Bitrus, said the terrorists attacked Lahou at about 4 pm on Wednesday but met their waterloo “as our men were able to overpower them”.
Apagu, bursting with enthusiasm, said: “We slayed 17 militants on Wednesday evening when they invaded Lahou village and equally seized two vehicles from them.”
He revealed that the attackers were all teenagers between the ages of 12 and 17 years.
Apagu said: “I can confidently tell you that when we took the battle to them, some of them fled but we are going to bury those who were killed this morning (Thursday).”
He however lamented that one of his members who happened to be a former councillor in the ward was killed by the terrorists in the attack.
To complement the efforts of the youth vigilantes in the North-east, the Nigeria Air Force said yesterday that it had deployed additional combat aircraft to the region in support of the ongoing counter-insurgency operations.
The new deployment came on the heels of the recent visit of the Chief of Air Staff to the operational areas.
The newly deployed platforms include the F-7Ni fighter aircraft, Mi-24/35 attack helicopters, Agusta 109 LUH, Supa Puma Combat Support helicopter and ATR-42 surveillance aircraft, which hitherto had been sent for scheduled maintenance.
The provision of additional combat aircraft in the North-east is in line with the president’s mandate to bring an end to insurgency in the zone, the Nigerian Air Force said.
It said: “The new deployment is aimed at boosting existing military efforts to defeat the Boko Haram terrorists. It is also expected to enhance the capability of the Nigerian Armed Forces to fight in a more proactive and efficient manner.” 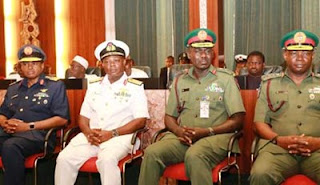