Share
Facebook Twitter LinkedIn StumbleUpon Tumblr Pinterest Reddit WhatsApp Telegram Share via Email Print
Share
Greece’s ruling Syriza party edged toward a formal split on Thursday, hours before rebel leftist lawmakers have promised to vote against a new bailout deal to keep the country afloat.
With opposition support, the government is asking parliament to approve a 85 billion euro bailout deal that Greece needs to avoid defaulting on a debt repayment next week.
The parliamentary vote, expected in the early hours of Friday, will test the strength of a rebellion by anti-austerity Syriza lawmakers, which could raise pressure on Prime Minister Alexis Tsipras to call snap elections as early as September.
The rebels’ leader, former energy minister Panagiotis Lafazanis, took a step toward breaking away from Syriza, a coalition of leftist groups which stormed to power in January on promises to reverse austerity policies demanded by the euro zone and IMF creditors.
“The fight against the new bailout starts today, by mobilizing people in every corner of the country,” said a statement signed by Lafazanis and 11 other Syriza members posted on the far-left faction’s Iskra website.
The statement called for founding a “united movement that will justify people’s desire for democracy and social justice” though it did not explicitly call for a new party or a split from Syriza.
Parliament, however, is expected to approve the bailout agreement by a comfortable margin since opposition parties have promised their backing for the government to ensure Greece does not return to financial chaos.
Tsipras has faced a rebellion among about a quarter of his 149 lawmakers since agreeing last month to the bailout deal under the threat of a banking collapse and euro zone exit.
Earlier, government spokeswoman Olga Gerovasili criticized the rebels, saying a government without a majority “cannot go far” and raising the possibility of early elections.
Gerovasili said that after the parliamentary vote, the focus would shift to a meeting of euro zone finance ministers on Friday who must also back the bailout, Greece’s third in the past five years.
However, she signaled that the government would struggle if Syriza remained disunited. “It is known that some Syriza lawmakers will not vote in favor of the accord,” she told Mega TV. “A government that does not have a governing majority cannot go far.”
The rebels insist the government should stand by the promises on which it was elected to reverse the waves of spending cuts and tax rises, which have had a devastating effect on an already weak economy over the past few years.
DISHARMONY
As Greece needs the new deal to make a 3.2 billion euro debt repayment to the European Central Bank on Aug. 20, Tsipras asked parliamentary speaker Zoe Konstantopoulou to expedite debate on the bill approving the bailout.
Konstantopoulou, a Syriza hardliner who opposes the deal, responded by calling a series of parliamentary committee meetings to consider the bill on Thursday, delaying the start of the plenary debate and meaning it is likely to last well beyond midnight before the vote is held.
Gerovasili, the government spokeswoman, made clear the government’s displeasure. “Ms Konstantopoulou has her own ways,” she said. “There are two differing views which are creating disharmony.”
Pressed on speculation that Syriza might formally split, leading to elections in the autumn, Gerovasili said: “It is possible that in the future there could be procedures to seek a new mandate from the people… This will happen when there is an assessment that there must be fresh elections.”
She was speaking before the Lafazanis statement.
Tsipras has said Syriza will hold a special congress after the summer to debate its differences.
Months of bitter negotiations between Athens and the creditors have shaken an economy which last year had been pulling out of a long depression before turning down again.
But data on Thursday showed the economy returned to growth in the second quarter of this year. Confounding economists’ expectations of a deepening recession, the ELSTAT statistics service said gross domestic product rose 0.8 percent quarter-on-quarter in April-June.
Nevertheless, the economy is likely to have worsened since then as the government imposed capital controls on June 29 to save the Greek banking system from collapse.
The bailout deal is based on forecasts that the economy will shrink between 2.1 and 2.3 percent this year. Nikos Magginas, an economist at National Bank, said the surprise data offered hope that the fall in GDP could be less than two percent in 2015.
With Greeks limited to withdrawing 420 euros a week from their accounts and businesses subject to severe controls on payments, the economy is taking another hit. The controls are unlikely to be fully lifted until the banks are recapitalized, encouraging Greeks to return cash they are keeping under their mattresses to their accounts.
Under the bailout deal, Greece must take steps to tackle the mountain of bad loans weighing on the banks.
The legislation before parliament also covers tax and pension reform, public administration reform, the relaunch of a privatization scheme which stalled earlier in the year and the establishment of a wealth fund for privatization projects which will be supervised by European institutions.
According to the 29-page memorandum of understanding Greece agreed with creditors, a copy of which was obtained by Reuters, Greece must move to rapidly privatize its ports, regional airports and its power grid operator. 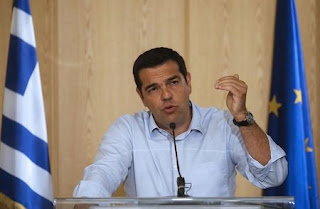