Share
Facebook Twitter LinkedIn StumbleUpon Tumblr Pinterest Reddit WhatsApp Telegram Share via Email Print
Share
Ructions in the Chinese stock market and currency suggest the country has reached a “critical point” where the absence of democratic freedoms is a growing threat to economic stability, Chinese artist and free-speech advocate Ai Weiwei says.
Speaking to Reuters at his atelier in the basement of a former brewery in Berlin’s Prenzlauer Berg district, Ai was more outspoken about China’s one-party system than he has been in a series of interviews with German media in recent weeks.
Last month, Chinese authorities abruptly returned Ai’s passport, which they had confiscated four years ago after secretly detaining him for 81 days. He arrived in Germany two week ago and was reunited with his son and partner, who have been living in Berlin for nearly a year.
“I think it reflects a kind of critical point,” the 57-year-old said of the plunges in Chinese stocks and devaluation of the yuan currency.
In his first published interview with an international media outlet since he left China, Ai said the rapid growth rates of the past years were built on cheap labor and the vastness of the Chinese market, but these advantages were fading and Communist party leaders did not know how to respond.
The only way to maintain the economic momentum was to set the foundations for more creativity and competition by opening up Chinese society, a direction Ai said the government was “openly refusing to go in”.
“In China today, they (have used) state power to try to play with the cards. But they don’t have enough cards. The end of the game comes,” Ai said, relaxed in an untucked white shirt and shorts, snapping pictures with his mobile device during the interview for his closely followed Instagram account.
“If you count the cards, they have a few cards lacking. They know it. So it doesn’t matter how they pretend. It’s not going to turn out in a way that satisfies them.”
Ai was criticized by human rights campaigners in China after an interview he gave with Germany’s Sueddeutsche Zeitung daily last week in which he appeared to soften his criticism of the Chinese government, expressing understanding for their actions and saying the police had a right to arrest people.
The comments came amid a deepening crackdown on dissent in China that has targeted human rights lawyers and journalists.
Asked whether his remarks to the German paper had been misunderstood, Ai stuck to his guns and said others had a right to criticize him, just as he had a right to say what he believed.
“You cannot just (dismiss) the other side as evil, which is too simple and it will not solve any problems,” he said, referring to the Chinese authorities.
DISSIDENT LABEL
Ai is often described as China’s most high-profile artist, dissident and political activist but he rejected those labels, calling himself a “human being” and nothing more.
“All those titles have been put on me,” he said. “I don’t care to be called an artist or dissident, that’s what other people put on me. I don’t like those hats.”
Still, he did not shy away from criticizing the Chinese system, saying a paradoxical mix of free enterprise and state control over decades had created “a lot of monsters” and a very unstable society.
“In general the living standards are much higher than before,” Ai said.
“But that doesn’t mean China is a better place. In many areas it never changed. You have a one-party system, it doesn’t have an independent media, the army belongs to the state, it is still a police state. It is ruled by law but not by the rule of law. The judicial system is not independent.”
Ai said he did not worry about whether Chinese authorities might prevent him from returning to the country if he was too critical or political in his public statements, saying: “Even if I cannot be allowed back to China, I would not cry over it.”
He has praised Berlin as a creative sanctuary that reminds him of New York in the 1980s and 90s, when he lived there. But asked about where he is likely to settle, he said that was unclear, describing himself as someone who lives day-to-day.
Next month, London’s Royal Academy of Arts will hold a retrospective of Ai’s work. And in December, an exhibition of Ai’s and Andy Warhol’s art is due to open in Melbourne, Australia. Ai said he had obligations stretching out over the next two years which would keep him busy, regardless of where he is based.
He says the Chinese authorities have promised him that he can return home, but when might he do so? “That depends on how long the West will allow me to stay here, really. Maybe they will throw me out very fast and I will have to go back. Maybe I will have to have my exile in China,” Ai said, breaking out in a big smile. 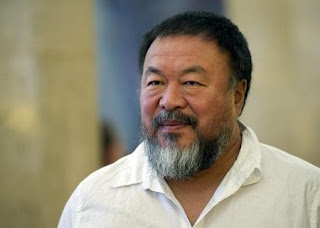