Share
Facebook Twitter LinkedIn StumbleUpon Tumblr Pinterest Reddit WhatsApp Telegram Share via Email Print
Share
On a Tuesday night where the Padres beat the Cincinnati Reds, 11-6, the story was about pitching.
Or better put, one particular San Diego pitcher.
Colin Rea (1-0), in his major-league debut, pitched five-plus innings and allowed three runs on seven hits. He walked three and struck out four.
“Obviously, I was a little nervous to start the game, but I settled in pretty good,” he said. “We jumped out to an early lead, and I think that was huge. I just tried to put up zeroes afterwards. It was just awesome.”
Second baseman Jedd Gyorko had four RBIs, smacking a two-run double in the first and a two-run homer in the second to pace the Padres.
“We were swinging the bats well, and obviously getting Colin some run support was good,” Gyorko said. “He went out and pitched great.”
Michael Lorenzen (3-8) was lifted after 1 1/3 innings. He was charged with seven runs on seven hits, with two walks and a strikeout. It was the rookie’s fourth straight loss, seventh in his last eight outings and his shortest stint as a starter.
“Command of the fastball,” Lorenzen said about what led to his downfall. “I think it was better the last two starts, then today it just wasn’t there. Now it’s how can I get better mechanically without thinking about it in the major leagues, that’s the struggle.”
The Padres know inconsistency. It was their second consecutive win after it had lost a season-high-tying six in a row.
San Diego, who had 11 hits, collected all 11 runs in the opening three innings. Four Padres had multiple hits. Everyone in the starting lineup, save shortstop Alexi Amarista, had a hit.
Rea, 25, started the season in Double-A San Antonio before being promoted to Triple-A El Paso on July 3. He brought a lifetime minor-league record of 26-33 into the game.
“It’s definitely an experience I’ll never forget,” he said of his debut. “At the same time, it’s nice to get that first one out of the way and kind of get your feet wet. I’ll move on to the next one and just kind of build off this one and try to get better the next start.”
The Reds have lost three in a row and six of their past seven.
In the ninth, third baseman Todd Frazier hit his 28th homer and Jason Bourgeois smacked his first pinch-hit homer, a two-run shot, for the game’s final runs.
Cincinnati pulled to within 11-3 in the fifth on center fielder Billy Hamilton’s RBI single and left fielder Skip Schumaker’s sacrifice fly. The Reds scored a run in the fourth on Frazier’s RBI double to make it 11-1.
Cincinnati’s sloppy defense with two outs helped the Padres pad their cushion to 11-0 in the third. Second baseman Yangervis Solarte and first baseman Yonder Alonso singled, with left fielder Matt Kemp’s walk loading the bases. Frazier booted left fielder Justin Upton’s ground ball and shortstop Ivan De Jesus threw the ball away for another miscue, scoring all three Padres.
“Down 11 after three, that’s a big hole to dig ourselves out of,” Reds manager Bryan Price said. “It was insurmountable and we weren’t able to overcome it.
“Just not a good night for Michael. We just couldn’t stop the bleeding and it got away from us.”
The Padres extended their lead to 8-0 in the second. Rea opened with his first major-league hit, Solarte and Alonso followed with doubles, with Alonso’s scoring two. Upton added another RBI double, which chased Lorenzen. That set the stage for Gyorko’s two-run homer off reliever Dylan Axelrod.
Rea got off to a rocky start as the first two batters he faced reached base. But he wiggled from the jam and it was the Padres breaking through in the first.
Gyorko had a two-run single, scoring Solarte (walk) and Kemp (single). Catcher Austin Hedges made it 3-0 when he drove in Upton with a single.
It was the start of a short outing for Lorenzen.
“Teammates have been great,” Lorenzen said. “They come up to me and they want to help. They see the struggle I’m going through, the growing pains right now and they want to help and that is all you can ask for.”
Or, to be backed by 11 early runs, which was the luxury enjoyed by Rea. 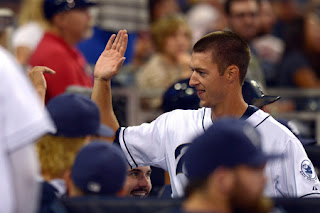