Share
Facebook Twitter LinkedIn StumbleUpon Tumblr Pinterest Reddit WhatsApp Telegram Share via Email Print
Share
Growth in China’s factory output, investment and retail sales were all weaker than expected in July, adding pressure on Beijing to roll out more measures to prevent a deeper slowdown, days after it shocked markets by devaluing its currency.
While the central bank insisted on Wednesday it would not let the yuan slide too far, the devaluation came days after data showed a hefty drop in exports and producer prices, which clearly weighed on Chinese manufacturers last month.
Nearly all data released for July was weaker than economists had forecast, pointing to further deterioration in the world’s second-largest economy. Data for June had fuelled some hopes that activity was stabilising after policymakers unleashed the biggest burst of stimulus since the global financial crisis.
“This kind of data will only accentuate the negative outlook that everyone has about the economy,” said Louis Kuijs, China economist at Royal Bank of Scotland in Hong Kong.
“Many people were expecting an improvement and there is no improvement. Things are getting worse rather than getting better. This kind of data makes it really challenging to achieve the official 7 percent growth (target) this year.”
Factory output rose 6.0 percent in July from a year earlier, slowing from June’s 6.8 percent rise and hitting a three-month low. Economists had expected a 6.6 percent rise.
Fixed-asset investment, a crucial driver of the world’s second-largest economy, also disappointed, rising 11.2 percent in the first seven months compared with the year-ago period, the weakest pace in nearly 15 years, the National Bureau of Statistics showed on Wednesday.
Markets had expected an 11.5 percent rise, which would have been a slight improvement from June and put the outlook for the second-half of the year on somewhat more solid footing.
Property investment growth cooled to 4.3 percent, the weakest since March 2009, despite a pick-up in housing sales.
The investment figure is being closely watched as the government tries to quicken infrastructure spending to shore up growth.
Retail sales rose 10.5 percent in July from the same time last year, slightly below forecasts for 10.6 percent growth, which would have been even with June’s reading. Auto sales fell 7.1 percent even as carmakers slashed prices and offered sweeter incentives.
The sluggish activity figures followed disappointing trade and inflation readings earlier this month that showed persistent weakness in the economy despite repeated stimulus measures.
The central bank has repeatedly cut interest rates and banks’ reserve requirement to boost credit and lower borrowing costs, and further policy easing is widely expected to avert a sharper slowdown.
If conditions do not improve soon, growth could fall below 6.5 percent in the current quarter, from 7 percent in the second quarter, ANZ economists said in a note.
Some economists believe China’s economy is already growing only half as fast as official data shows, or even less.
DEVALUATION ADDS TO WORRIES
On Tuesday, the People’s Bank of China shocked global markets by devaluing the yuan by nearly 2 percent, a move it billed as a free-market reform but which some suspect could be the beginning of an engineered, longer-term depreciation of the exchange rate to boost ailing exports.
The yuan fell further on Wednesday, taking its two-day losses to more than 4 percent at one point. [CNY/]
“The July data is overall dovish (for policy) … but in itself surely did not warrant such an extended fall in the yuan as the numbers are still highly respectable,” said Chester Liaw, an economist at Forecast Pte Ltd in Singapore.
Regardless of Beijing’s motives for the currency policy u-turn, analysts said the decline in the yuan so far was too mild to spur global demand for Chinese goods.
If the devaluation was a one-off move, economists at OCBC believe Beijing’s next step may be to widen the yuan’s allowable trading band and cut banks’ reserve requirements further to offset the impact of capital flowing out of the country.
The central bank said last week that the economy may face headwinds in coming months due to its reform efforts, and it warned that monetary policy was being blunted by a lack of new growth drivers and lukewarm appetite for new investment.
While the property sector is showing some stabilisation due to government support, analysts say the sector will continue to drag on broader growth until high inventories of unsold homes are cleared. 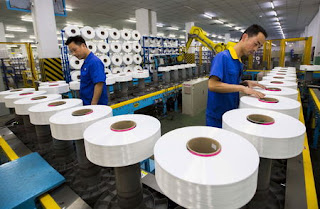