Share
Facebook Twitter LinkedIn StumbleUpon Tumblr Pinterest Reddit WhatsApp Telegram Share via Email Print
Share
Indonesian President Joko Widodo put two experienced technocrats into economic management posts on Wednesday in a cabinet reshuffle designed to reassure investors worried about a policy drift that has allowed growth to slip to a six-year low.
Widodo’s move defied expectations that his own party would compel him to make more political appointments, a move that may surprise critics who say he has not been the robust leader they had hoped for when he took office last year.
Darmin Nasution, who was central bank governor from 2010 to 2013 and received his doctorate from the Sorbonne in Paris, was chosen to replace Sofyan Djalil as chief economic minister.
The 66-year-old pledged to tackle rising food prices and streamline import policy to shore up confidence at a time when the government has faced criticism for passing measures many see as protectionist.
Nasution told reporters a top priority would be to improve data accuracy when setting food policy.
Another unexpected choice was the appointment of Harvard-educated financial executive Thomas T. Lembong as trade minister. Chief executive of Quvat Management, a Singapore-based private equity firm that invests in Indonesia, Lembong previously worked at Deutsche Bank and Morgan Stanley.
Lembong was a senior vice president at the Indonesian Bank Restructuring Agency that was set up to revive the banking system after the Asian financial crisis in 1998.
“Indonesia and the president are aware of a rising negative perception of its trade policies and Lembong’s appointment is a corrective measure for that,” said Jakarta-based analyst Douglas Ramage.
EXTERNAL FOCUS
A source familiar with Widodo’s reshuffle plan said he was keen to dispel impressions of weak leadership and policy muddle.
By appointing ministers with international experience and an external focus he may address concerns that his government too readily resorts to protectionism and is not wholly committed to nurturing foreign investment, the source said.
Widodo’s meteoric rise from furniture businessman to president of the world’s third-largest democracy, and the first to come from outside the political or military establishment, was widely seen as a watershed moment for Indonesia.
Supporters had predicted that the former governor of Jakarta would root out corruption, promote people based on merit rather than connections and create an environment where a stalling economy could reignite and investment flourish.
Instead, he has been widely seen as sometimes out of his depth and struggling to get around entrenched vested interests.
Wellian Wiranto, an economist at OCBC bank, said new chief economics minister Nasution should have a strong understanding of both monetary and fiscal policy as former governor of the central bank and head of the tax office.
“There is … a better chance of policy coordination,” Wiranto said. “At the end of the day, however, it will depend on whether he has the political air cover from his boss to do what he needs to do on the ground.”
Four other cabinet appointments were announced on Wednesday.
Luhut Pandjaitan, a former chief of special forces and close aide to Widodo, retained his role as chief of staff in the president’s office and was also appointed as coordinating minister for security and political affairs.
New Cabinet secretary Pramono Anung and Coordinating Minister for Maritime Affairs Rizal Ramli are both said to be close to the chief of Widodo’s party, Megawati Sukarnoputri.
While many consider Ramli a seasoned economist, his appointment along with Anung is seen as a move to appease former president Megawati, who has made no secret of her demands on Widodo to toe the party line.
Widodo has been dogged by severe public criticism over his perceived failure to stand up to vested interests and the political elite that backed him in last year’s election.
“What we see is Widodo being politically astute in the reshuffle,” Ramage said, adding that it showed the president had not completely given in to political pressures. 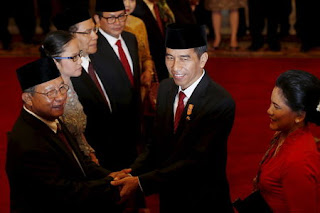