Share
Facebook Twitter LinkedIn StumbleUpon Tumblr Pinterest Reddit WhatsApp Telegram Share via Email Print
Share
AT&T Inc said on Wednesday it expects revenue, earnings and free cash flow to grow through 2018 following its DirecTV purchase and investments in Mexico, though it also sees higher capital expenditure.
As the U.S. wireless market reaches saturation, AT&T hopes to tap into DirecTV’s video assets and has been expanding its wireless operations in Mexico to grow revenue.
AT&T, which closed its $48.5 billion acquisition of DirecTV in July, also plans to deliver video content through ad-supported TV streaming and mobile video products to unlock new revenue.
The No. 2 U.S wireless carrier said in a statement it expects revenue to grow in the double-digit range for the rest of 2015. The company, which previously forecast capital expenditure of about $18 billion, said it sees that rising to about $21 billion.
AT&T forecast 2015 adjusted profit of $2.62 per share to $2.68 per share. Analysts on average were expecting a profit of $2.60 per share, according to Thomson Reuters I/B/E/S.
“In bringing together AT&T and DirecTV we’ve articulated a simple goal, the development of a premium, effortless entertainment experience delivered anywhere,” chief executive Randall Stephenson told analysts on a conference call.
AT&T shares fell 2.7 percent to $33.71 in afternoon trading. Through Tuesday’s close of $34.65, they had risen 3.2 percent this year.
The newly expanded AT&T leapfrogs the biggest U.S. cable company Comcast Corp. The company serves more than 26 million U.S. customers and more than 19 million in Latin America, making it the world’s biggest pay-TV company.
AT&T has bundled its wireless service with DirecTV’s pay-TV offerings to cross-sell products across its expanded customer base.
The new packages, which were rolled out on Monday, have “exceeded sales expectations on launch,” Stephenson said without providing details.
On Wednesday, the company maintained its forecast of $2.5 billion or more in cost savings or synergies from the DirecTV deal on an annual basis through 2018.
In response to an analyst’s question about whether AT&T’s cost-savings forecast was conservative, chief financial officer John Stephens said he had to factor in foreign currency fluctuations in DirecTV’s markets such as Brazil and Venezuela.
The target of $2.5 billion in cost savings is achievable and “it could break to the upside,” Stephenson said.
The company is “creating a new category” of combined wireless and TV services and that’s why the cost-savings goal did not include new revenue opportunities, such as cross-selling products, he said. 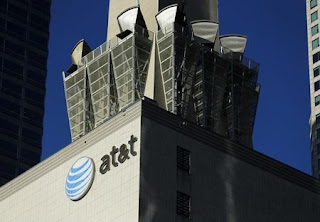