Share
Facebook Twitter LinkedIn StumbleUpon Tumblr Pinterest Reddit WhatsApp Telegram Share via Email Print
Share
Pirates manager Clint Hurdle was able to sum up Pittsburgh’s win over the Los Angeles Dodgers on Sunday in one word.
“Wow.”
Rookie shortstop Kang Jung-ho’s three-run home run capped a nine-run seventh inning, and center fielder Andrew McCutchen homered and drove in four runs, as the Pirates rallied for a 13-6 victory to complete a sweep of the Dodgers.
The Pirates swept a three-game series from the Dodgers in Pittsburgh for the first time since May 31-June 2, 1999, at the since-demolished Three Rivers Stadium.
“This is the type of the team we are,” McCutchen said. “We don’t quit. We never think we’re out of a game.”
Kang greeted right-handed reliever Joel Peralta with his ninth homer of the season after the Pirates scored eight runs in two-thirds of an inning off righty reliever Jim Johnson (3-4).
Kang was hit by pitches in his two previous plate appearances.
“Sometimes, you’ve just got to put a foot down, and Jung-ho did that with the home run,” Hurdle said.
McCutchen’s homer came with a runner on in the fifth inning. The blast drew the Pirates within 5-3. The All-Star center fielder hit a two-run single during the big seventh inning that put Pittsburgh on top 12-5.
McCutchen is hitting .455 (15-for-33) with 13 RBIs and 12 runs in his past 10 games. He owns an MLB-high .410 average with runners in scoring position this season.
Asked if he could remember a better stretch of hitting in his seven-year career, McCutchen said, “I don’t know, it’s so hard for me to say.
“I still don’t think I’m completely where I want to be. I just still think I’m going to be better before the season is over.”
Pirates catcher Francisco Cervelli had three hits, including a solo home run in the eighth inning, and three RBIs.
Third baseman Aramis Ramirez, second baseman Neil Walker and first baseman Sean Rodriguez each had two of the Pirates’ 16 hits.
Cervelli, left fielder Starling Marte and Ramirez all had RBI singles in the seventh, and Walker hit a sacrifice fly.
Right-handed reliever Arquimedes Caminero (2-1) pitched two scoreless innings for the victory.
‘CAN ONLY GET BETTER’
The Pirates (65-44) won for the fifth time in six games and the 15th time in their past 18 home games at PNC Park.
They drew within five games of the St. Louis Cardinals in the National League Central and maintained a 3 1/2-game lead over the Chicago Cubs in the race for the top NL wild-card position.
The Dodgers (62-49) stayed three games ahead of the San Francisco Giants in the NL West. Los Angeles had won seven of eight before coming to Pittsburgh. The Giants were swept in a four-game weekend series by the Cubs at Chicago.
Dodgers manager Don Mattingly left Johnson in to face 10 batters during the decisive seventh.
“I wanted to obviously to get out of that inning without anybody else coming in,” Johnson said. “It was just one of those fluky things. I felt like I made a lot of quality pitches, a lot of weak contact.
“I’d honestly say it’s one of the worst professional outings I’ve had, so it can only go better from there.”
First baseman Adrian Gonzalez and catcher Yasmani Grandal led the Dodgers’ 14-hit attack with two hits and two RBIs each.
Right fielder Andre Ethier, second basemen Howie Kendrick and Enrique Hernandez, who entered after Kendrick left with a hamstring injury, had two hits apiece.
Kendrick exited after beating out an infield single in the fifth inning. Hernandez hit a solo homer run in the eighth, his fifth of the season and second in as many days.
Kendrick had his fifth multiple-hit game in a row and is 11-for-23 (.478) during that span.
Both starting pitchers lasted five innings. Pirates right-hander Charlie Morton allowed five runs and 10 hits, while Dodgers left-hander Alex Wood gave up three runs and five hits.
The Dodgers struck quickly with two first-inning runs.
Shortstop Jimmy Rollins hit a leadoff double and scored on Gonzalez’s single. Grandal drove in Gonzalez with a groundout.
Gonzalez hit another RBI single in the third to make it 3-0.
The Pirates got a run in the fourth when Ramirez led off with a double and scored on Cervelli’s sacrifice fly.
The Dodgers made it 5-1 in the fifth on an RBI single by Grandal and a run-scoring double by third baseman Alberto Callaspo.
McCutchen answered with his 17th homer in the bottom of the fifth to make it a two-run game. 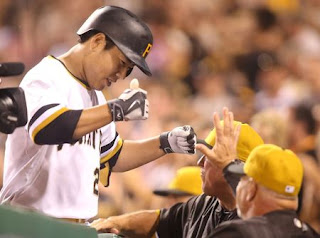