Share
Facebook Twitter LinkedIn StumbleUpon Tumblr Pinterest Reddit WhatsApp Telegram Share via Email Print
Share
Frank Gifford, a star on the football field for the New York Giants and later a star in the broadcasting booth with the “Monday Night Football” team that helped popularize the NFL, died on Sunday at age 84, his family said.
Gifford, who was married to TV talk show host Kathie Lee Gifford, died suddenly of natural causes at his Connecticut home, his family said in the statement released to NBC.
“Deeply grateful to all 4 ur outpouring of grace,” Kathie Lee Gifford tweeted, adding his family was “finding comfort in knowing where Frank is.”
One of the National Football League’s best and most versatile players in the late 1950s and early 1960s, Gifford’s skill, good looks and gracious manner made him an all-around celebrity in New York City.
Gifford was a key player for the Giants during their 23-17 loss to the Baltimore Colts in the 1958 NFL title game, which was decided in the league’s first sudden-death overtime period.
It came to be known as “the greatest game ever played” and sports historians say its dramatic finish and national TV coverage set football on a path to become the most popular sport in the United States and a multibillion-dollar industry.
Gifford, who played mostly as a running back and wide receiver, led the Giants to the NFL championship in 1956 while winning the league’s most valuable player award, and helped take them to the title game in five other seasons.
Gifford’s career was interrupted in 1960 in one of the most notorious plays in NFL history, a brutal but legal hit by Philadelphia Eagles linebacker Chuck Bednarik that left Gifford unconscious. Gifford retired from playing but returned in 1962 and played three more years.
He was inducted into the Pro Football Hall of Fame in 1977.
“Frank Gifford was the ultimate Giant. He was the face of our franchise for so many years,” Giants President John Mara said in a statement.
Calling Gifford “an icon of the game,” NFL Commissioner Roger Goodell said in a statement: “Frank’s talent and charisma on the field and on the air were important elements in the growth and popularity of the modern NFL.”
Gifford had dabbled in broadcasting during his playing career and became part of the Giants television team after retiring. ABC hired him in 1971 for the second season of its “Monday Night Football,” which brought the NFL into prime-time viewing hours and became a must-see ritual for sports fans.
TEAMED WITH COSELL, ‘DANDY DON’
Gifford was teamed with another retired NFL star, former Dallas Cowboys quarterback Don Meredith, and the sharply opinionated Howard Cosell. Gifford handled the play-by-play work while Cosell and “Dandy Don” provided running analysis.
Much of the broadcast’s appeal came from the interplay of the folksy Meredith and the acerbic Cosell, while Gifford played straight man.
“Howard pontificated. Don Meredith was the country guy who kept the big city slicker straight. I kept law and order,” Gifford said in an interview that aired when “MNF” ended its run on ABC and moved to the ESPN network for the 2006 season.
“Monday Night Football” was a steady winner in the ratings. Gifford stayed with “Monday Night Football” for 27 years, before retiring in 1998.
Cosell blasted Gifford in his 1985 memoir, “I Never Played the Game,” as well as the “jockacracy” of athletes-turned-broadcasters in general as incompetents who ended up in broadcasting because of their on-the-field stardom.
“Like President Reagan, he is a Teflon man,” Cosell wrote of Gifford. “No matter how many mistakes he makes during a telecast, no matter how glaring his weaknesses as a performer, nothing sticks to him.”
Gifford wrote his own book describing Cosell as insecure and vengeful.
Gifford was born on Aug. 16, 1930, and grew up in oilfield towns in the Southwest and California. He was an All-American at the University of Southern California and a popular figure on campus who married the homecoming queen.
The Giants made him their No. 1 draft choice in 1952 and in his 12 seasons with them, he played defensive back, running back, wide receiver and quarterback, as well as returning punts and kickoffs.
In 1986, he married his third wife, Kathie Lee Gifford, who was 23 years younger and who often spoke glowingly about their marriage on her talk show, “Live! With Regis and Kathie Lee.”
She wrote in a memoir that she and Gifford would always be faithful to each other, but a tabloid newspaper revealed in 1997 he had been having an affair with a flight attendant. Their marriage survived.
Gifford had three children with his first wife, Maxine, and two with Gifford. 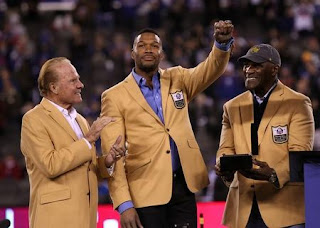