Share
Facebook Twitter LinkedIn StumbleUpon Tumblr Pinterest Reddit WhatsApp Telegram Share via Email Print
Share
Third baseman Juan Uribe slugged a three-run homer while right-hander Matt Harvey pitched seven scoreless innings as the New York Mets completed their second consecutive sweep, defeating the Miami Marlins 8-6 on Wednesday at Marlins Park.
Mets first baseman Lucas Duda matched Uribe with three RBIs, hitting a two-run double in the third and adding a sacrifice fly in the ninth.
It was the Mets sixth successive victory.
However, the game almost slipped away from the Mets in the bottom of the ninth as Miami scored six runs and had runners on the corners with two outs.
Mets closer Jeurys Familia, who gave up two hits in the ninth, got his 29th save of the season by getting Marlins center fielder Christian Yelich to bounce out to Duda.
It was Miami’s highest-scoring ninth inning of the year, and it included a three-run double by pinch-hitter Miguel Rojas.
Harvey (10-7), who also set a career high in wins, allowed two hits and no walks, striking out six. He retired the final 13 batters he faced.
His only jam came in the first, when Derek Dietrich doubled and reached third with two outs. But New York’s Curtis Granderson made a sliding catch on first baseman Justin Bour’s line drive to right field, ending the threat.
Harvey’s velocity in that first inning was registering 93-94 mph, instead of his usual 97-mph fastball.
“I thought something was wrong,” Mets manager Terry Collins said. “He was 93, his slider was just OK. Then, all of a sudden, third inning, he got it going and pitched great from then on.”
Harvey admitted it took him a while to get going.
“I don’t know if it had anything to do with the Nationals series,” Harvey said.
“Some starts it’s a little easier to get going than others. That’s what I’ve been noticing from my (Tommy John surgery) recovery.
“But instead of going away from my mechanics, I did a good job of staying with it.
“That’s something (pitching coach Dan Warthen) and I worked on. Stay focused on the starts you are not feeling well, and it will come back.” 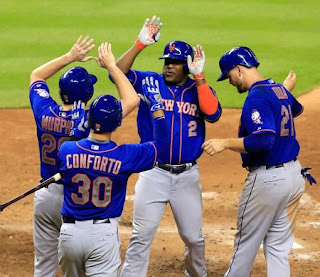