Share
Facebook Twitter LinkedIn StumbleUpon Tumblr Pinterest Reddit WhatsApp Telegram Share via Email Print
Share
The total cost to France of reimbursing Russia for cancelling two warship contracts will be less than 1.2 billion euros, French Defence Minister Jean-Yves Le Drian said on Thursday.
Le Drian said on radio RTL the initial price for the two Mistral helicopter carrier warships had been 1.2 billion euros, but France will have to pay less than that because the ships were not been finished and the contract was suspended.
“Talks between President Putin and President Francois Hollande have concluded yesterday. There is no further dispute on the matter,” he said.
He added there were no further penalties to pay over the contract, which was canceled because of Russia’s role in the Ukraine conflict. 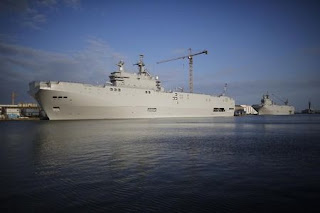