Share
Facebook Twitter LinkedIn StumbleUpon Tumblr Pinterest Reddit WhatsApp Telegram Share via Email Print
Share
South Africa’s mining ministry held talks with companies and unions over planned job cuts on Wednesday, as President Jacob Zuma’s government frets over high unemployment ahead of key elections next year.
The mining industry, which contributes around 7 percent to Africa’s most developed economy, is struggling with sinking commodity prices, rising costs and labor unrest.
“It’s about jobs, jobs, jobs and none of us should leave this place without committing something to the table,” mining minister Ngoako Ramatlhodi told reporters.
Zuma’s African National Congress (ANC) heads into local elections next year with its main rival the Democratic Alliance (DA) targeting wins in key metropolitan areas, including Gauteng, home to economic hub Johannesburg.
The DA will target the ANC on its inability to reduce stubbornly high unemployment, which officially stands at 25 percent but some experts believe is much higher.
Ramatlhodi on Tuesday ordered Glencore to suspend operations at its 10 million tonne-a-year Optimum coal mine because the mining group hadn’t followed legal procedure in its plan to cut 380 jobs at the mine.
Glencore has said it complied with all legal requirements relating to job cuts.
The DA described the suspension at Optimum as a “panic move” that will make jobs losses worse.
Ramatlhodi said talks with Glencore had taken place overnight and he hoped to be able to lift the mine suspension if the company met government directives.
The mines ministry is also mediating between Glencore and power utility Eskom after a spat between the two companies over the price the state-owned company pays for coal.
South Africa is facing potentially its biggest-ever power crisis as Eskom imposes regular power cuts due to insufficient generation capacity, pushing up costs for industry and hampering already sluggish economic growth.
In a blow to the government’s job protection plans, state-controlled Scaw Metals Group said on Wednesday it could also shed as many as 1,000 jobs in South Africa.
The gold sector’s two biggest unions have rejected a 17 percent wage increase offer from producers, including AngloGold, Harmony and Sibanye, stringing out pay negotiations and raising the prospect of strikes.
Unions representing workers at coal producers also dismissed a wage offer from employers’ body, the Chamber of Mines and said negotiations were not making progress.
Platinum producers, including Lonmin, Anglo American Platinum and Impala Platinum, have also clashed with unions and government over their plans for job cuts. Lonmin has said it was planning to close or mothball several mine shafts in a bid to survive plunging prices, putting 6,000 South African jobs at risk. 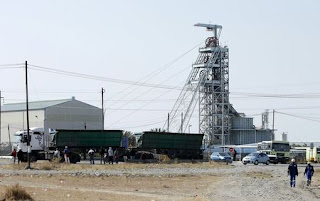