Share
Facebook Twitter LinkedIn StumbleUpon Tumblr Pinterest Reddit WhatsApp Telegram Share via Email Print
Share
Azia community in Ihiala Local Government Area of Anambra State was yesterday, thrown into mourning, following the burial of a family of seven that died in a gas explosion in Ajegunle, Lagos State on July 20.
Markets and shops were closed in respect to the family.
The deceased were Charles Obidiegwu, 51, his wife Esther, five children – Isaac, Ebube, the sister in-law, Mary, Kate and his son.
Death came calling when the gas cooker Esther was cooking with caught fire.
The late Charles ran a medicine shop and was a member of the Chosen Charismatic Church in Lagos.
Tears flowed like a river as sympathisers lamented the doom that befell the community.
The deceased’s elder brother, Mr. Livinus Obidigwe lamented: “My younger brother’s wife was cooking at about 12pm when the gas exploded.
“The explosion may have been caused by a leakage which they didn’t know about. None of them escaped because the kitchen was both the entry and exit point.
“Before fire fighters arrived, the damage had been done; my younger brother had died and the others died in the hospital seven days later.
Chimezie Obidiegwu, looking devastated, lacked words to express his feelings. He was hopeful that his late brother’s love, understanding, coupled with the fear of God, would see them through.
In his sermon, the officiating priest, Rev. Fr. Jude Unigwe condoled the family and urged them not to question why it happened the way it did, as only God had the answer.
He urged the people to live a good life as nobody knows when and how death would come.
“It is a painful death and nobody deserves to die in that manner but nobody can question God; he knows the best. Nkwankwa village should use this death to unite and be their brother’s keeper. 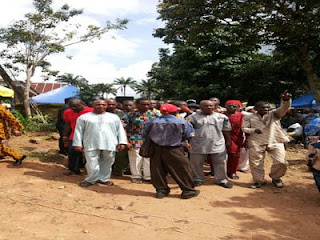