Share
Facebook Twitter LinkedIn StumbleUpon Tumblr Pinterest Reddit WhatsApp Telegram Share via Email Print
Share
By Lehar Maan
Sprint, whose shares were up 6 percent in morning trading on Tuesday, has been under pressure to cut costs amid concerns it was spending too much to keep and acquire customers.
The company added a net 675,000 customers in the quarter ended June 30, helped by discounts and offers such as doubling data capacity.
Even so, Sprint slipped to fourth-place among U.S. wireless carries by subscribers, falling behind T-Mobile US Inc , which reported a rise of 2.1 million customers.
Sprint said it now had 57.7 million customers. T-Mobile said last month it had 58.9 million.
Sprint, 80 percent owned by Japan’s SoftBank Corp <9984.T>, also reported that its revenue fell 8.7 percent in the quarter.
CEO Marcello Claure said Sprint had cut costs more than it had expected. “We are already beginning steps to eliminate as much or more cost next year as we continue to reinvent how we operate …,” he said on a call with analysts.
Claure also said he was focused on retaining customers, which he said costs much less than acquiring new ones.
Chief Financial Officer Joseph Euteneuer, who will step down later this month, said cost cuts in fiscal 2016 would be equal to or greater than those in 2015.
Sprint said it has been working with SoftBank and other partners to set up a company that will help customers lease mobile phones on “attractive terms.”
Wireless service providers are increasingly offering monthly leasing plans alongside service fees, rather than forcing customers to take two-year contracts for subsidized phones.
Thanks to such offers, Sprint had record-low customer defections in its postpaid business.
Defections, known as churn in the industry, fell to 1.56 percent from 2.05 percent a year earlier.
Sprint reported a loss of $20 million, or 1 cent per share, compared with a profit of $23 million, or 1 cent per share, a year earlier. Net operating revenue fell to $8.03 billion from $8.79 billion.
Net operating expenses fell 9 percent to $7.53 billion.
Analysts were expecting a loss of 9 cents per share on revenue of $8.43 billion, according to Thomson Reuters I/B/E/S.
Up to Monday’s close of $3.34, Sprint’s shares had fallen about 20 percent this year. 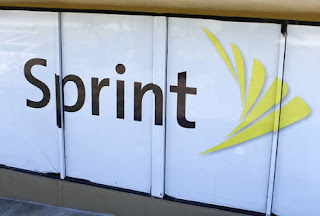