Share
Facebook Twitter LinkedIn StumbleUpon Tumblr Pinterest Reddit WhatsApp Telegram Share via Email Print
Share
By Josie Le Blond
A heat wave gripping Germany forced officials to close the glass dome of Berlin’s parliament building to visitors on Tuesday due to health concerns.
“Just after 2 p.m. we measured a temperature of nearly 50 degrees Celsius (120 degrees Fahrenheit) and decided to shut the dome,” said spokeswoman Eva Haacke. “Of course it can get dangerous for people who can’t stand that kind of heat.”
Tourists are attracted to the Reichstag’s transparent viewing platform, designed by British architect Norman Foster, for its panoramic view of the city.
The dome’s multi-award winning design, symbolizing rebirth and transparency, allows visitors to oversee politicians debating in the chamber below when parliament is in session.
Haacke said that while visitors could still look out from a separate roof terrace, the spiral walkway inside the dome itself was unlikely to reopen soon given a forecast for outside temperatures of up to 37 degrees Celsius this week. He said black ice or falling icicles can also force the dome’s closure in winter.
The Reichstag building attracts 2.5 million visitors a year. Admission is free, but visitors must register in advance. 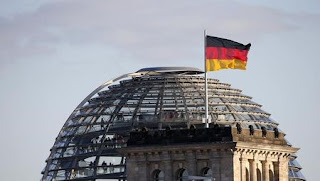