Share
Facebook Twitter LinkedIn StumbleUpon Tumblr Pinterest Reddit WhatsApp Telegram Share via Email Print
Share
A death toll of 27 from flooding across Myanmar was expected to rise as rescue workers struggled on Monday to reach some of the hardest-hit and most remote inundated areas, officials said.
More than 150,000 people have been affected by severe flooding after weeks of torrential monsoon rains caused rivers to over run banks and triggered landslides, the government said.
“The death toll in Rakhine State alone will reach several hundred. There are a number of far flung areas that we haven’t been able to reach,” Hla Saw, a senior member of the Arakan National Party, which represents Rakhine State, said.
The state was battered by the remnants of Cyclone Komen that made landfall in Bangladesh on Thursday. Areas northeast of the state capital, Sittwe, including Mrauk U and Minbya, were particularly hard hit by flooding.
Tha Hla Swe, the president of the Myanmar Red Cross Society, said his volunteers were having trouble getting to areas that needed help.
“When a flood is localized in one area there are areas that are free of flooding that we would use to mobilize volunteers, but it is widespread,” he said.
The state-owned Global New Light of Myanmar newspaper reported 700 houses had been destroyed by landslides in Hakha, capital of neighboring Chin State, and the city was cut off due to damage to roads.
Myanmar’s military junta was sharply criticized domestically and internationally in 2008 for its woeful response to the devastation caused by Cyclone Nargis that killed 130,000 people.
This time, the government has looked more proactive in handling the disaster, though it is much smaller, with President Thein Sein and the powerful military chief, Min Aung Hlaing, making visits to affected regions over the weekend and extensive coverage of relief efforts in state media.
The damage to agricultural was also being assessed on Monday.
The state-owned Kyemon Daily reported the Ministry of Agriculture and Irrigation as saying that more than 970,000 acres (392,000 hectares) of farmland, most of it rice paddy, had been damaged and more than 40,000 acres were completely lost. 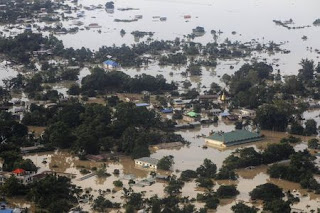