Share
Facebook Twitter LinkedIn StumbleUpon Tumblr Pinterest Reddit WhatsApp Telegram Share via Email Print
Share
By Sruthi Ramakrishnan
Tyson Foods Inc , the biggest U.S. meat processor, cut its full-year profit forecast after posting its slowest sales growth in nine quarters as customers overseas refused to accept shipments delayed by West Coast port disruptions.
During the disruptions, Asian buyers were importing meat from other countries and were overwhelmed with supply after the port issues ended in February, Tyson Chief Executive Donnie Smith said on a call on Monday.
Tyson was forced to cut prices and take a hit to margins in the third quarter to clear “significant” inventory, said Smith, adding that conditions had not improved much so far in the current quarter.
The company’s shares, which have been trading at record highs over the past month, fell nearly 11 percent.
Tyson reported a lower-than-expected profit for the April to June quarter due to losses in its beef business, its biggest by sales and worth about 24 percent of operating profit last year.
Beef sales volumes fell 3.9 percent in the quarter and the business posted an operating loss of $7 million, also hurt by low cattle supply.
Tyson’s total sales rose 4 percent to $10.07 billion in the quarter. The company’s sales have grown more than 10 percent in the past four quarters, helped by record high beef prices as the U.S. cattle population fell due to years of drought.
But the high domestic prices, low cattle supply and a strong dollar hurt exports. U.S. beef exports declined 14.4 percent in May and will likely remain constrained, the U.S. Department of Agriculture said last month. (http://bit.ly/1Dksc7O)
Smith said U.S. beef supplies will remain tight until the second half of 2016.
Springdale, Arkansas-based Tyson cut its full-year adjusted earnings forecast to $3.10-$3.20 per share from $3.30-$3.40.
Net income attributable to Tyson rose 32 percent to $343 million, or 83 cents per share, in the third quarter.
Excluding items, it earned 80 cents per share, well below analysts average estimate of 92 cents, according to Thomson Reuters I/B/E/S.
Analysts were expecting revenue of $10.3 billion.
Tyson’s shares were down 9.5 percent at $40.08 in midday trading, recovering slightly from a session low of $39.61. 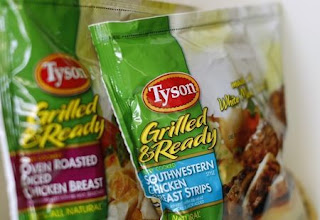