Share
Facebook Twitter LinkedIn StumbleUpon Tumblr Pinterest Reddit WhatsApp Telegram Share via Email Print
Share
Brazilian federal police on Monday arrested former government minister Jose Dirceu, one of the most senior members of the ruling Workers’ Party to be detained so far in a corruption scandal engulfing state-run oil company Petrobras.
Dirceu, chief-of-staff under popular former President Luiz Inacio Lula da Silva between 2003 and 2005, was already under house arrest for running a vote-buying scheme. His involvement in an even larger scandal threatens to bring the investigation closer to Lula and further tarnish his legacy.
Federal prosecutor Carlos Fernando dos Santos Lima called Dirceu a key instigator of the Petrobras scandal, saying he took bribes from contractors while in office and continued to receive payments even when he was jailed in 2014 for the vote-buying scandal in Lula’s first term.
Lima said Lula was not a target of the widening probe but added during a press conference: “No one is exempt from investigation.”
Federal police were serving seven other arrest warrants, including one for Dirceu’s brother, and 26 search-and-seizure warrants in the latest phase of an investigation that has undermined the popularity of President Dilma Rousseff and led to calls for her impeachment.
Workers’ Party Treasurer Joao Vaccari was arrested in April and stepped down to focus on his defense.
At least one government witness has said Rousseff’s 2014 re-election campaign was financed in part with money originating from a scheme to siphon funds from overpriced engineering and construction contracts with Petrobras, or Petroleo Brasileiro SA, to pay bribes to company executives and politicians.
Rousseff, Lula’s chosen successor, is not under investigation, and she and her party say all campaign donations were legal.
Lima said the bribery and kickback scheme began during the Lula administration, and there was no evidence of involvement by former Petrobras Chief Executive Officer Graça Foster, whom Rousseff had appointed.
Dirceu’s lawyer was not immediately available for comment. Dirceu was arrested in Brasilia, and police were waiting for Supreme Court approval to transfer him to Curitiba, the epicenter of the investigation in southern Brazil.
Lima said Dirceu was responsible for hiring two ex-Petrobras executives involved in the scandal, former refining and supply chief Paulo Roberto Costa and former head of engineering and services Renato Duque.
Curitiba-based law firm Arns de Oliveira & Andreazza said on Monday it would start negotiating a plea deal for Duque this week, which could lead to damaging testimony on Dirceu’s role.
The investigation into corruption at Petrobras, which began in March 2014, has also led to jail for some of Brazil’s most senior engineering executives and caused the oil company to write off more than $2 billion in losses related to the case.
Dozens of lawmakers, mostly from Rousseff’s governing coalition, are being investigated for receiving money in the alleged scheme, which prosecutors suspect went beyond Petrobras to other state-run companies.
Lima said that, while corruption has long existed in Brazil, political kickbacks became systematic during the Lula years. 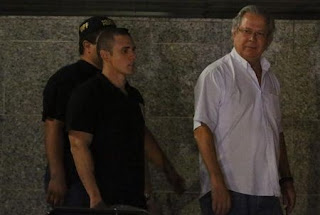